You are here: Home>Locations>Ryton on Dunsmore>Whatever the Weather in Ryton

Whatever the Weather in Ryton 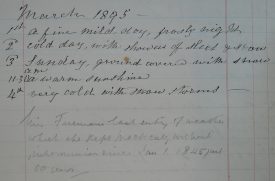 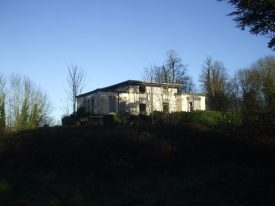 Miss Mary Freeman of Ryton on Dunsmore did something quite remarkable. She noted the weather in the village on a regular basis for roughly 50 years, up until her death in 18951. The final entry in the seventh diary being a rather poignant note written in pencil in another hand which says, ‘Miss Freeman’s last entry of weather which she has kept practically without intermission since January 1st 1845, just 50 years.’

The form each diary takes varies across the years. At times it records the weather as a summary for the month or on specific dates; at other points it gives the date and a brief note about the weather. As well as a mix of factual recordings, such as the temperature according to the thermometer on her wall and the number of days of sunshine in a particular month, Mary also sometimes records the weather in rather more descriptive form. For example, we learn that July 1864 was a very dry month with the detail that the ‘cock pit is quite dry, which has not occurred before in the memory of the oldest people now living in the village’ (12th July 1864).

This dry spell must have continued into August as ‘near Cubbington, I saw a sheep standing in a small stream, and drinking the water – a very unusual occurrence, and a sure sign of dry weather.’ (31st August 1864). We also learn that October 1882 must have been extremely wet as she writes, ‘this has been a rainy month – rain 20 days – and a large flood in the Avon.’ (31st October 1882).

Mary also records other noteworthy events such as an earthquake on the 6th October 1863 with the entry ‘this morning between 3 and 4 there was a slight shock of earthquake, accompanied by a rumbling noise, like the wind in the trees. I felt my bed shake, as if some person had struck against it.’  to observing in the sky a ‘very large meteor in the north low on the horizon’ (9th September 1871), or that the sun was eclipsed on 31st December 1880, which must have been a spectacular way to end the year.

One of the things that I found the most interesting about the diaries was the inclusion of local traditions and rhymes from around the country regarding the weather. Mary was clearly fascinated when she heard about ‘Good Friday Bread’ and recorded the following conversation:

24th Talking with Mrs Bayliss this afternoon, I asked how little Tom […] was? her opposite neighbour’s child, who I had heard was ill – She said he had been very poorly with the bowel complaint, and nothing his mother gave him did him any good, ‘so’ she continued ‘I took him a piece of Good Friday bread’ and grated some of it in a little Brandy, the child took it, and it cure him; he has been to school as usual again’ ‘Good Friday bread,’ I said what is that? ‘Bread made and baked on Good Friday’ replied Mrs Bayliss ‘it never goes mouldy, and is very useful grated in brandy, as a medicine, the piece I have now has been baked 7 or 8 years it is quite good, but very dry. I remember my Mother having some that had been made more than 20 years. I always keep it wrapped in paper in a box upstairs.’(24th May 1863)

Mary Freeman was born in 1809 in either Wolston or Brandon (it varies between the Censuses). By 1851, she was living at Ryton House (which was called ‘New House’ on that census) with her Uncle Stephen who is recorded as being a ‘Landed Proprietor’. Stephen built the house in 1806-1807. After the death of Stephen in 1856, Mary became head of the household and she continued to live at Ryton House until her own death in March 1895. After her death, she left the house to Charles Browett, her nephew and a solicitor in Coventry, who owned the house until shortly after the Second World War. It is as a result of the Browett connection that these diaries came to be deposited in the Warwickshire County Record Office.

This article is an abridged version of July 2015’s Document of the Month for the Warwickshire County Record Office. Further articles can be found on their website.

Linkedin
More from Ryton on Dunsmore
More from Weather