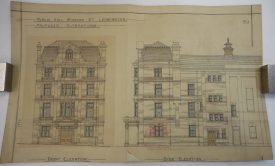 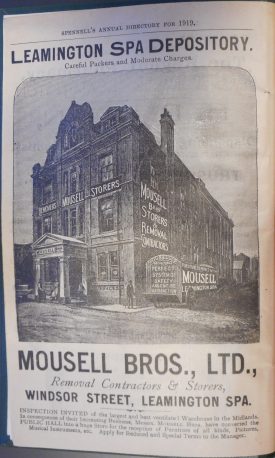 A picture of the hall appeared in the 1919 Spennell's Directory.
Spennell’s Directory, 1919 ed. Page 6 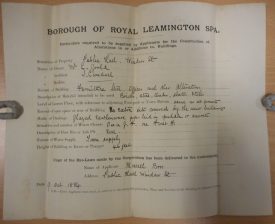 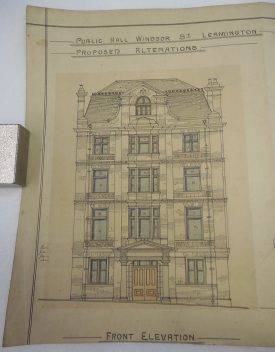 Discolouration around the plan of the Public Hall, Leamington, suggests it was once displayed in a frame.
Warwickshire County Record Office reference CR0634/9/10

When Leamington Spa Town Hall is mentioned, most of us probably think about the current premises on the Parade. However from 1854 until its demolition and replacement there was a Public Hall situated on Windsor Street. Victorian plans of the building held at Warwickshire County Record Office give us the chance to step back in time to appreciate the hall’s varied and interesting history.

The Public Hall was built by the Leamington Literary and Scientific Institution as a purpose built space for their increasingly popular lectures and concerts.1  Through this role the hall became a focal point of the town, attracting a large number of visitors and hosting many notable speakers, including classical musicians and, especially, the National Agricultural Labourers’ Union.2

After the Leamington Literary and Scientific Institution closed, the building was sold to Mr Ebenezer Goold, who commissioned the alterations for which the record office now holds the plans. The architect employed for the job was a Leamington local himself, the famous John Cundall, whose work can be seen around the town. This work includes the present Town Hall on the parade and St John’s church on Tachbrook Street amongst others. Commenting on the distinctive style of the buildings Cundall designed, Lyndon F. Cave has suggested that he was inspired by French Gothic detail in his designs.3 This is perhaps reflected in his ideas for the Public Hall.

As well as playing host to the Leamington YMCA, the Public Hall later became the headquarters of the renowned removal company Mousell Brothers in 1896. Indeed the 1919 Spennell’s directory included an advertisement for Mousell Brothers including a beautiful picture of the Public Hall as it was. The page largely advertises the conversion of the hall into a store for the company and describes it as, “the largest and best ventilated warehouse in the Midlands.”4 As well as extensive storage space, the Public Hall also gave the company space to hold auctions following house clearances.

Unfortunately however the hall’s future was not safe. It was quickly demolished to make way for new developments in 1957.5  Although it had formed such a large part of Leamington’s architectural, cultural and entrepreneurial history relatively little was made of the demolition and just over 60 years later, surprisingly few of us are likely to remember its existence.

The Public Hall certainly had a long and interesting history and the plans we hold give an insight into its role and function. However, like all historical documents, they also have a story of their own to tell.

At Warwickshire County Record Office we hold a large bundle of plans concerning suggested improvements to the Public Hall, under the catalogue reference CR0634/9/10. Another collection (CR 2487/Z3132) offers further plans and specifications about the amendments to the building. Together these collections demonstrate what a great deal of use building plans can be, in showing exactly how a building looked, its functions and purposes, and they bring the hall back to life in our imaginations.

Besides this the plans are all very pleasing to the eye, something which a previous owner seems to have taken advantage of. The plan shown here is particularly interesting because it seems that at one time or another, a former owner put it in a frame on display. The side elevation of the plan is folded back, and there is discolouring of the front image indicating that it was enclosed in a frame and exposed to light. Intriguingly, on closer inspection it is clear that annotations have been removed or covered on the plan, leaving it pristine in a frame. However, from the perspective of a local historian this is an awful shame because it obscures the architect’s notes from the plan.

Despite this, the plans and people’s memories of the hall are its remaining legacy and allow it to retain relevance into the future. Have you got any memories or stories about the Public Hall on Windsor Street?

This article was Document of the Month for Warwickshire County Record Office in January 2019.  Further articles can be found on their website.