You are here: Home>Locations>Warwick>A Warwick Castle Secret, and a Conversation With Ghosts

A Warwick Castle Secret, and a Conversation With Ghosts 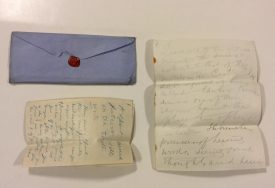 A photograph of the Hon. Sidney Greville (seated) and other members of the Greville family (one possibly being Lady Eva Greville).
Warwickshire County Record Office Reference CR1886/Box468-9

Archives are full of unexpected things. Century old secrets can be read in countless bundles of personal letters, and evidence for all sorts of events pieced together using various accounts and materials. Whilst trawling through the papers relating to Anne (1829-1903), 4th Countess of Warwick, I recently came across two documents that could have easily appeared in one of M R James’s notorious ghost stories.

Sealed with wax in an envelope, inscribed with something relating to the decoration of her London residence, were two folded papers in a very loose and rushed hand. After my eyes managed to settle and make sense of the handwriting, it was clear that these were two transcripts of ‘seances’ that must have occurred at Warwick Castle during the late 19th century.

An interest in ghosts

The autobiography of Anne’s eldest son and heir mentions the fact that his mother had an interest in ghosts;

Like many other very old houses Warwick Castle is said to be haunted, but for reasons that are doubtless perfectly satisfactory no ghost has ever honoured me with a visit. My mother used to hear strange and uncanny noises; I never succeeded in doing as much as that.

He then went onto describe how the castle and countess were often visited by an Archdeacon Colley, who used to hold seances in the Oak Bedroom (now called the Kenilworth Bedroom), explaining that;

He brought a medium from Birmingham, and I believe they raised, or saw, a little girl carrying flowers. I can only hope they were satisfied.

Colley, a true eccentric who also used to hold seances in the rectory of Stockton Church, was seemingly notorious for often being carried around in a coffin with a glass top. No other physical evidence of Anne’s interest in the supernatural world has appeared, until now.

The first, written with pencil in a very loose hand which might well be the Countess’s, seems to exhibit a technique known as ‘spirit’ or ‘automatic writing’. This is where an individual is encouraged to sit and channel words from the spirit world onto paper without looking at what is being written.

Both of the transcripts centre around the ghost of an old servant called ‘Edward Jameson’, who seems to have been blamed for creating ‘noises’ in the castle. Most eerily, especially for myself a researcher of Warwick Castle’s archive, it begins:

Leave all to the future research. The Power at work is not that of the mortals in the Castle of here. The Spirit of my called Edward Jameson is one of these who now haunt the place…

The transcript seems to explain that this ghost had stolen something from the household in the past, and was assisted in his noise making by two other spirits.

The second transcript is in a different hand, and captures an attempt at a ‘conversation’ with a ghost through a ‘medium’. Various questions are put to the ghost, and others ghostly servants appear too including a Sarah Kitchener and Richard Leigh. Once more, attempts are made to encourage the spirit Edward Jameson to give up the ‘secret’ or location of a stolen item hidden somewhere in the castle’s rooms. The Countess, accompanied by one of her friends (perhaps Lady Ashburton, one of Anne’s closest confidants) and also her eldest son, Lord Brooke, seem to have visited several bedrooms in order to find out which room contained his ‘secret’. A small map drawn onto the back of a sheet shows that it must have been a set of rooms in the upstairs and furthest western part of the castle, which are now where the castle’s finance and General Manager’s offices are (and inaccessible to the public).

It is clear that these efforts were made in some attempt to encourage Warwick Castle’s ghosts to refrain from bothering its Victorian owners. Anne lived in an age where there was a growing interest in the spiritual world, with seances being a popular pastime amongst many in 19th century Britain. The letters, and Archdeacon’s Colley’s involvement, also make it clear that their understanding of the spiritual world was rooted in their Christian faith. Both documents ask the ghost if prayer would be able to ‘set them [the spirits] free’.

Did they find the secret?

Unfortunately, and as the transcripts end quite abruptly, we shall never know if they found Edward Jamesons’s secret. We can be certain that Anne had stuffed these papers away in her bills and receipts in order to make sure they weren’t found again in her lifetime at least…

email
More from Warwick
More from Folklore and Myth