You are here: Home>Locations>Ragley Hall>'…the remains of many distinguished persons...' Anne Boleyn

'…the remains of many distinguished persons...' Anne Boleyn 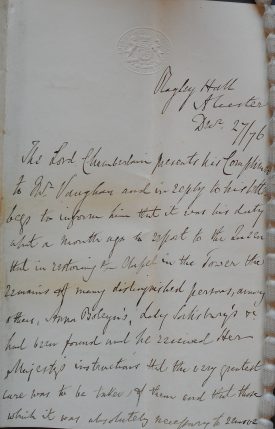 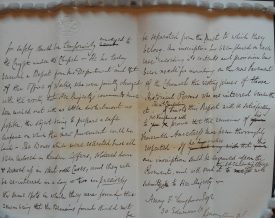 In 1876, whilst undertaking restoration work in the St Peter ad Vincula Chapel at the Tower of London, workmen discovered a number of skeletal remains under the floor. One of the most significant of those discoveries were the remains identified as belonging to the ill-fated Tudor Queen, Anne Boleyn, whose tumultuous love affair with Henry VIII has been a focus of the recent BBC adaptation ‘Wolf Hall’.

… it was his duty about a month ago to report to the Queen that in restoring the Chapel in the Tower the remains of many distinguished persons among others, Anne Boleyn’s

As a quirk of history would have it, the Lord Chamberlain at the time was none other than the 5th Marquess of Hertford, Lord Francis George Hugh Seymour. And if that name sounds familiar…Lord Seymour was a descendent in title, though not in direct bloodline, to the family of Anne’s successor, Jane Seymour.

The letter is also interesting in light of the recent debate that has occurred surrounding the reinterment of Richard III. With Richard III, the decision was made to move Richard’s remains and rebury him within Leicester Cathedral. In the case of these remains, the letter makes it very clear that Queen Victoria had given very specific instructions on how they were to be handled.

of the Office of Works, who were jointly charge with the work, that Her Majesty’s commands have been carried out with as little disturbment as possible, the object being to prepare a safe surface on which the new pavement could be laid – The Bones which were collected have all been enclosed in leaden Coffers, soldered down and screwed up in Stout Oak Cases, and they will be re-interred in the a day or two in precisely the same spots in which they were found the reason being that the remains found should not be separated from the Dust to which they belong.

CR114A, from which this letter comes, is one of several collections that relate to the Seymour Family of Ragley Hall. It was deposited in the Warwickshire County Record Office in 1951 by the 8th Marquess of Hertord, Lord Hugh Seymour. It contains a diverse range of documents including: wills, deeds, accounts, military records, journals and letters, both personal and those written in a professional capacity, giving a fascinating insight into the family from the 18th Century onwards.

This article is April 2015’s Document of the Month for the Warwickshire County Record Office. Further articles can be found on their website.