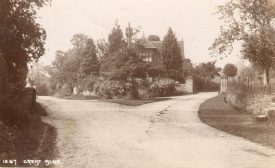 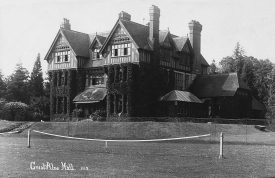 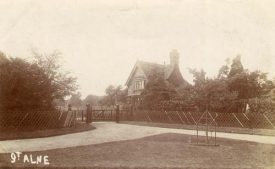 The bombing of Coventry in November 1940 was one of the more destructive raids of the Second World War. A week later, about twenty children from my junior school in the city were evacuated to Great Alne. I was ten years old. I am now 85 years old and writing this in 2015 as a recollection of three months billeted in Great Alne Hall from November 1940 to February 1941. The hall is now the centre of Maudslay Park.

The Hall had been built in 1937 – 1939 by and for Mr. Swiffen, a property developer. It had replaced a mock Tudor house of the 1870s of which the only evidence is the still-standing lodge of that period.

The new house was built in the style popular in the 1930s – brick-built, two storeyed, and with bold bay windows and a sweeping staircase from the entry hall. However, within two years of installation, the metal Crittal window frames were already causing leaks during heavy rain. Two distinctive features stand out in my memory. One was the green baize door which separated the domestic staff from the owner and his family. The other was a ballroom in the middle of the Hall frontage. It was not quite finished when the war broke out and although it had a sprung floor for dancing and a grand piano, this room was never used. It was already an out-of-date relic of past life-styles.

Life at the Hall

The family consisted of Mr. and Mrs. Swiffen and their ten year old son, Antony. I was quartered ‘behind the green baize door’, but Antony and I shared the services of Miss Cave, a relatively young and personable governess chosen to look after the Swiffen’s son. The other key member of staff was Nora, the Irish cook whose enthusiasm for the Aga cooker was limitless.

Shortly after the outbreak of war in 1939, Mr. Swiffen had been called up for active service as an army officer, leaving Mrs. Swiffen to a rather solitary life in the Hall.

Five days a week, I walked from the Hall to the Victorian village school (no longer standing) and returned in the late afternoon. I found that the lessons at the school were out of kilter with those at my junior school in Coventry. Even then, I was worried that I might not pass the examination for grammar school entry. I was also totally horrified that each Friday afternoon was spent making rugs. It was the realisation that the education curriculum was severely limited at Great Alne, together with my home sickness, that persuaded my parents to take me back to Coventry.

The Swiffens sold Great Alne Hall within a year or two, moving to Shottery Manor House near Stratford-on-Avon. The hall was purchased by the Maudslay Car Company, who transferred their wartime activities of aeroplane manufacture to an estate that could be guarded. Many subsidiary huts and buildings were added around the Hall which destroyed the harmony of the site. The company closed down in the 1970s and the site was abandoned.