You are here: Home>Locations>Rugby>A Rugby Reminder of Family

A Rugby Reminder of Family 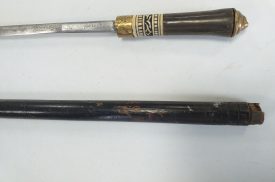 Close-up of the handle of the walking stick / sword given to Keith Ranu by his father.
Image courtesy of Keith Ranu 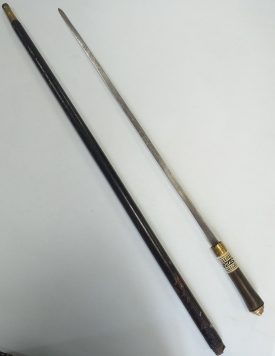 The walking stick / sword given to Keith Ranu by his father.
Image courtesy of Keith Ranu

The walking stick / sword in the photograph is from India. An officer in the British army was a friend of my Dad, and he gave this sword to my Dad as a gift, this was when my Dad had moved to Rugby,. Then Dad passed it on to me. They met probably in a pub, as he liked socialising!

I will pass it on to my Grandson. It’s a reminder of my family, it has a sentimental family value. My Dad came to Rugby in 1953, July. I was born in  October 1953, and I came to Rugby in 1963 with my Mother and Brother. For them ten years, I never saw my father until I come to an airport in London, and from the airport coming back to Rugby there was two men in the car, one a driver, one a passenger. And I remember asking my Mum which one is my Dad, because I never saw him before that! Before we came over, I was looking forward to seeing my Dad, because I didn’t know nothing about England. When I come over, he’d saved enough to buy his own house, and sent money back home to look after the rest of us back home.

My Dad was a binman and a hard worker, he couldn’t speak much English. The dustbins then were out the back of the garden, and steel. He was known as Paddy Singh in Rugby. He was well known in Rugby, he was one of the first Asians to come to Rugby.

We’re a Rugby family, this is all I know. This is my home. In my family, there’s six of us, three brothers, three sisters, we all lived in Rugby at one time. All my family moved away from Rugby, I’m the only one who stayed in Rugby.

There’s been so much changed in Rugby – I remember there was no Brownsover estate, no New Bilton, or Cawston. Frobisher Road, there used to be a massive big block pipe, we used to walk along there to get to Lawford Lane. I went to Herbert Kay School (now Bilton High). I remember where the worker’s club is now on Oliver Street, there used to be St Matthew’s School. I love it here, I’ve got friends, I want to give something back.

Rugby’s my home. When I come to Rugby I couldn’t speak a word of English, I didn’t know what A or B meant, and I used to hate going to school. Them days, they had no facilities, I was just placed with everyone else. I had no chance of doing my homework, so I used to get caned, I used to get slippers.

I left school the first opportunity I had, as soon as I turned 15 and I started working at the GEC. After that I got married in 1976. I have two children, a boy and a girl, and a couple of grandchildren from my son, and two granddaughters from my daughter. When my children were born, my children were born at St Mary’s hospital. There was no buses going there and I couldn’t afford a taxi, so I had to cycle there in the dark for an evening visit.

When my grandson was born at Walsgrave, I didn’t know if it was a boy or a girl, so I brought a massive suitcase with clothes for both! The nurses were going, ‘are you going on holiday?!?’

There is plenty more I have done with my life.