You are here: Home>Subjects>Law, Order, and Emergency Services>Crime and Civil Disorder>A Question of Loyalty. Warwickshire Militia and the Riots of 1715

A Question of Loyalty. Warwickshire Militia and the Riots of 1715 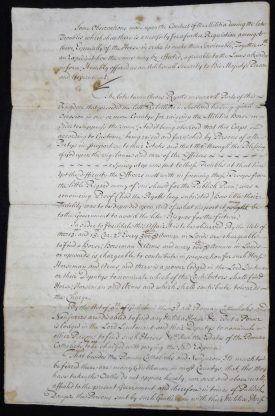 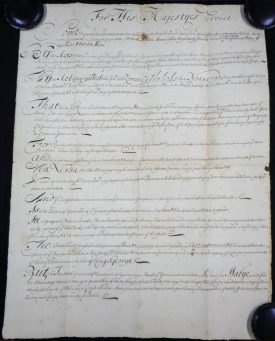 In July 1715, the country was in a state of tumult.  Riots were taking place across England and Scotland, opposing the accession of protestant King George 1st. In Birmingham, protestant meeting houses were attacked in the dead of night and a Warwickshire militia was raised to quell the disturbances.

A posse of 300 men with horse and arms were gathered and although a ‘speedy stop’ was put to the riots, this month’s featured document contains observations by Colonel George Lucy (of the Charlecote Park Lucys), a commander in the militia, on the need to ensure a more dependable force and how this might be achieved.

Little regard for the publick peace

Although the riots were quelled, it was Lucy’s damning observation that the difficulty experienced in raising the militia force and the ‘little Regard many of them show’d for the Publick Peace’ was proof that the loyalty of his men to the Crown was questionable, and new regulations were needed to avoid the risk of supporting the rebellion.

At that time the militia were a part-time force provided by landowners, who supplied men, horse, and arms – or contributed to the cost of these according to their income. Lucy suspected some of these landowners to have insufficient loyalty to the Crown, which meant that the loyalty of the men they supplied was equally doubtful.

He proposed that men, horse, and arms were sought only from ‘well-affected’ Gentlemen. Those whose loyalty was questionable would only be required to contribute money, like the Catholics and Nonjurors – those who refused to swear an oath to previous Monarchs William and Mary.

This, Lucy explained, would effectively disarm the ‘disaffected’ and he predicted that a force of almost 10,000 men, drawn from the most faithful of the country’s subjects, could be raised in this way.

George Lucy’s solution to the problem of rebellious militia may seem simplistic, but it seemed that solutions were urgently needed to the increasing unrest pervading the country.

The riots of this period were some of the worst cases of public disorder in the 18th century, serious enough to prompt the introduction of the Riot Act. Local officials were given powers to disperse gatherings of 12 or more by reading out the act. If the crowds did not disperse within the hour, officials were authorised to use force whilst being protected against prosecution for any injuries or deaths occurring in the process.

Although it was repealed in 1967, the Riot Act is still with us today. However, in contrast to its violent origins, reading the riot act is now little more than a harsh rebuke!

L6/1637: A journal written by the High Sherriff detailing the measures taken  to try to stop the riots in Birmingham

L6/1639: It may be that George Lucy’s observations were merely a draft for this document, which puts his proposals into a more formal, large-scale format. This was submitted to the Lord Lieutenant and Deputy Lieutenants of Warwickshire.

CR868: This letter must have been written by George Lucy to a Col. Oughton prior to the militia’s attempt to put down the riots in Birmingham.  In it he notes that almost 300 men had been mustered, and this was, he hoped, ‘sufficient to dislodge the Rioters’.

This article was Document of the Month for July 2017 at the Warwickshire County Record Office. Further articles can be found on their website