You are here: Home>Locations>Warwickshire unspecified or out of county>Magic Tricks and Mystery in the Warwickshire Militia

Magic Tricks and Mystery in the Warwickshire Militia 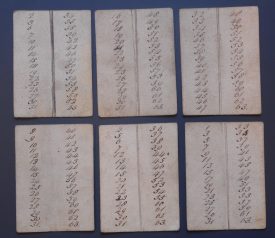 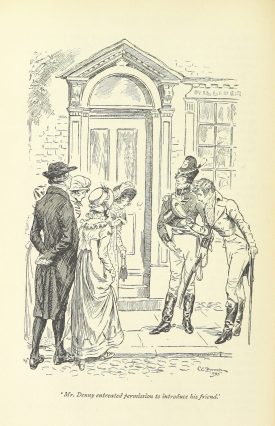 Denny and Wickham charm the Bennet girls with their militia uniform
Sourced from the British Library, 'Pride and Prejudice', Jane Austen. Illustration by C. E. Brock.

If these cards look somehow familiar, it is because they are the same trick that you will find in many cheap Christmas crackers today – ‘The Mystery Calculator.’ These are a little more sophisticated than you would find in a cracker; beautifully handwritten with gilt edges, and date from the early 19th century. However, the technique is the same. It is a mathematical party trick, whereby the ‘magician’ can determine what number the participant has chosen by knowing which cards also contain that number.

The cards themselves have been wrapped in a sheet of tantalisingly unanswered riddles, including questions like ‘what is the difference between fish alive and live fish?’ (there is ‘a’ difference), ‘what is that which is always invisible yet never out of sight?’ (the answer, ‘is’) and ‘why is a parson’s horse like the King?’ (answers on a postcard please!)

One riddle which these cards themselves answer is: ‘What is that that is often brought to table, frequently cut & never eaten?’ The answer: a deck of cards, of course!

Think of a number…

These documents are held with a bundle of personal papers for William Ward Prickett, including his commission to the Warwickshire Militia as ensign in 1811, and second lieutenant in 1812. The magic tricks and riddles seem to be connected to other documents relating to service in the miltia. For example, on the back of some printed instructions ‘To Clean Leather Breeches, Sword Belts, etc.’ we find notes for another mathematical trick:

take from the last no. the

Pastimes in the Miltia

Men of the militia served as a reserve force for the army. They undertook training, home defence, and law enforcement, but did not generally travel abroad to fight in the Napoleonic wars. These riddles and tricks may not have been used to entertain active fighting troops, but perhaps fostered camaraderie between the men of the militia and would have served as pastimes or party tricks at social gatherings. These documents bring to mind Mr. Wickham charming the Bennett ladies with his wit in Austen’s Pride and Prejudice – although I am sure Mr. Prickett was not quite so dastardly!

This article is September’s Document of the Month for the Warwickshire County Record Office. Further articles can be found on their website.