You are here: Home>Locations>Ryton on Dunsmore>Memories of Ryton Military Camp 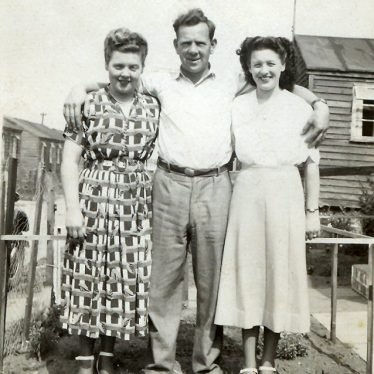 My Grandad in the centre with my Mum on the left. 1950s.
Image courtesy of Ian Burgess

Me, standing on a tree stump. 1950s.
Image courtesy of Ian Burgess 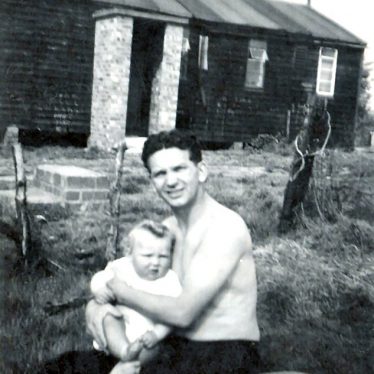 My Dad holding my brother as a baby. 1950s.
Image courtesy of Ian Burgess 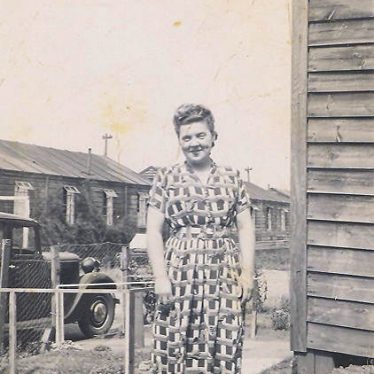 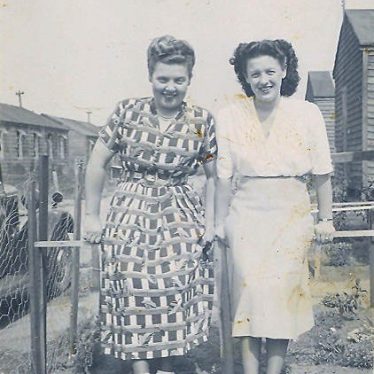 My Mum on the left, 1950s.
Image courtesy of Ian Burgess

I have very hazy memories of the camp. I was born there in the early 1950s, and my parents must have moved in only a little while earlier. Mum always explained they were “squatters”,  being made homeless during the war when they were bombed out of the house in Primrose Hill Street Coventry, where they lived with my Gran.

The service road at the camp was an unmade surface,  just a straight road with a wide turning area at the end which was bordered by farm fields. One of the fields parallel to the road had an Anti Aircraft gun emplacement with a grass bunker around it; my parents forbade me to go there so I never had close up views of it.

I remember the local farmer’s name was Mr Gethin and his fields were at the end of the camp road, so when I went to the village school in the High Street I had to walk through those fields. I remember a gate and style that was surrounded by BIG COWS (I was only little at the time) and I was so scared and afraid to go home through those fields. I have always remembered that now, 60 years later!

I have a memory of a milkman coming down the road with a milk churn on the back of his flat bed truck using a ladle to fill our jugs with milk. My brother was born at home while we were there, but I can’t visualise the interior of the hut – I think it was the first or second hut on the right when entering the camp from Oxford Road. I don’t know when the camp was demolished but I imagine it was when they built the present car park for the Ryton car plant.

The only other things I remember was a cement works on the left of Oxford Road going from the camp towards Coventy. Further down the road was the Ryton Bridge Hotel on the A45, and it had an outdoor swimming pool!

I can’t remember much else as I was so young. I think it must have been about 1957 when we moved to a new council flat in The Barley Lea in Stoke Aldermoor Coventry, when my Dad moved jobs from Rootes Group Ryton Plant to Stoke Aldermoor.

I later went to Binley Park School which I believe has also been demolished due to concrete cancer.

Remembering from a distance

I now live on the beautiful Northern Beaches of Sydney Australia but have fond memories of my childhood in Ryton on Dunsmore and Coventry, then my early working life in Rugby before moving later to Devon then Australia.

I’m sorry there are no strong specific memories of the camp but I suppose most people who lived there have now passed apart from a few who were children then, I would be interested to know if anyone else remembers anything.

Linkedin
More from Ryton on Dunsmore
More from Military