You are here: Home>Locations>Warwickshire unspecified or out of county>Easton Lodge Gardens: The Spiritual Home of Daisy Countess of Warwick 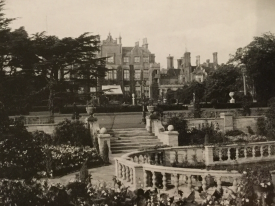 Easton Lodge during the lifetime of Daisy.
Image supplied by Adam Busiakiewicz, from the Warwick Castle collection. 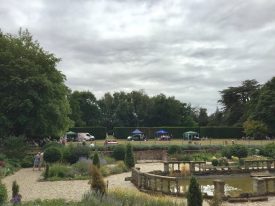 Easton Lodge as it appears today (with Peto's Italian pool and balustrade in the foreground), summer 2018.
Image courtesy of Adam Busiakiewicz 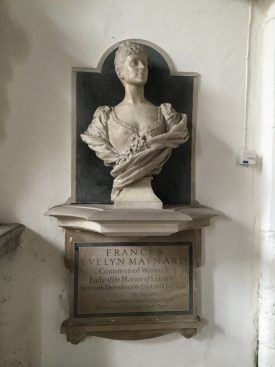 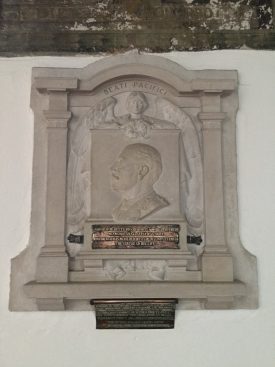 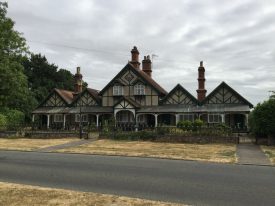 My vision was to make a workers’ college of Easton where for so many generations its occupiers had taken as their right the best that the world can offer. All of Easton’s beauty was to be on offer to those who needed the gift. I have often thought how much I should like to see not only my own home, but large unused mansions in every county in the British Isles placed at the disposal of the rising generation to be used as educational centres…[so that] they had found at Easton a sound training and hearty encouragement, amid surrounding that stimulated them to discover the best that was in themselves.

Nestled in the wide open agricultural fields of Essex is a truly remarkable garden. Despite being situated a mere few miles from Stansted Airport, the gardens of Easton Lodge provide a truly captivating retreat from the monotonous drudgery of our modern age.

A Warwick title, an Essex background

Having arrived along the unspoilt lanes through the bucolic ‘Little Easton’, one couldn’t help but feel very far away from the rolling hills of Warwickshire. Yet, it slowly became obvious that there was only one name on the lips of every visitor. ‘Daisy’, the Countess of Warwick, can be counted amongst the most remarkable figures to have lived during fin-de-siècle Britain. Although her title was due to her marriage to the future Earl of Warwick in 1881, Frances Evelyn Maynard, or ‘Daisy’ to her friends, grew up in this secluded corner of England.

Easton Lodge had been the ancestral home of the Maynards since the 16th century, where successive owners had continually made additions and alterations to the ancient Manor which was granted to them in 1590. When Frances inherited this estate on the death of her father Colonel Maynard at a young age, she was considered one of the most wealthy heiresses in Victorian Britain.

Despite having become the Countess of Warwick in 1893, it is true that Daisy had a far greater devotion to her own family’s ancestral seat than Warwick Castle. Easton was very much her own home and creation, whereas Warwick Castle would always be compared with (in her own words)  “any other museum or picture-gallery. It bears a certain depressing likeness to another castle in Holloway.”1 Easton was also used to host her notorious weekend shooting parties, perhaps even more so than Warwick, which included the likes of Edward, the Prince of Wales, and the cream of the aristocracy in late Victorian Britain.

In 1902 she had employed gardener Harold Peto to improve the pleasure gardens around her Essex mansion. This included the installation of highly decorative schemes imitating Italian, French and Japanese examples. As a friend to the downtrodden, and an unlikely advocate to the burgeoning Socialist movement, she had even employed 67 homeless, rehabilitated inebriates from the Salvation Army to spend five months realising Peto’s designs.

Her philanthropic pursuits are still visible across the estate, local villages and towns. Notably, she had set up several schools, colleges and homes to benefit the deprived boys and girls who lived in neighbouring communities. Often bearing a strong emphasis on practical agricultural methods, these extremely forward-thinking institutions came both too early and too late, especially if one considers the vastly changing nature of Britain’s fortunes and her family’s declining wealth during this period.

Despite being over 130 miles away from Warwickshire, one such building is the alms-house opposite Little Easton Church, whose architecture is a playful Victorian re-imagining of a Tudor cottage. This pretty piece of architecture still bears a fabulous elaborate crowned monogram ‘W’ (for Warwick) in plaster, accentuated in red paint and dated 1895. A stunning marble bust of Daisy, and a fine memorial plaque to her husband the Earl of Warwick, wait patiently inside the serene interiors of the church on the opposite side of the road.

Daisy’s support of Socialism, and the fledgling Labour Party, continued throughout the opening decades of the 20th century. Her transformation from socialite to socialist was a contradiction which haunted her throughout her life. The likes of HG Wells, Samuel L Bensusan and Gustav Holst eventually replaced her Royal visitors. Not only did she stand for the Labour Party as the first female candidate for Warwick and Leamington in the General Election of 1923 , she had made several attempts to hand over both of her Warwick and Easton homes to the Labour Party and TUC in an attempt to create Labour’s Chequers. Several photographs and videos survive of Daisy walking with notable socialists through her majestic gardens at Easton, including the likes of Ramsay MacDonald, Labour’s first ever Prime Minister. This extravagant plan, an attempt to impose grandeur on what was supposed to be a workers movement, could never be born. With these plans not coming to fruition, Easton Lodge’s later history was chequered, although the Warwick link did not die.

Map marker in the right place? If not, please correct the map.
Locations
Warwickshire unspecified or out of county (182)
Subjects
Stately Homes and Large Country Houses (516)
Author
Adam Busiakiewicz
Date