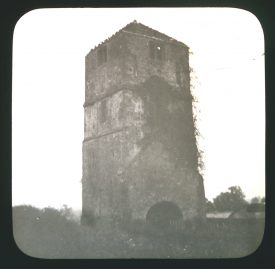 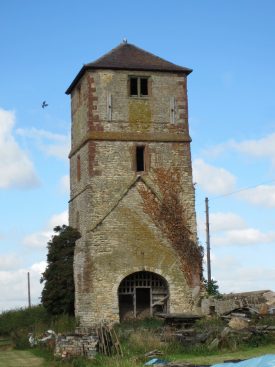 This tower still stands looking rather forlorn (though it appears to be in a better state than it was in 1900). It was originally attached to the handsome church of St Lawrence that originated in the 12th century and had frescoes inside; sadly most of the church was demolished in the mid 18th century. The tower now belongs to Hall Farm; the base of the tower has been used as a chicken house in the past and is now being used for storage.

Interesting finds in the churchyard

Kelly’s 1892 trade directory reveals: ‘Excavations were carried out in the churchyard in 1852: on descending deeper a leaden coffin was discovered, quite perfect, inside which was a wooden one, containing the body of a man, carefully embalmed, which, on examination, was found to have been beheaded, the only mark on anything being the letters T.B. worked in black silk upon the breast of the shirt.’ The coffins of the Earl of Chichester and Baron Dunsmore (who died in 1653) his wife and other members of the Leigh family are then mentioned. ‘The coffin of Lady Audrey Leigh [their daughter] who died in 1640 was opened, and the body found to be perfectly embalmed, and in the most entire state of preservation, as if she were alive, her face very beautiful, her hands exceedingly small and not wasted; she appeared as if asleep, being dressed in fine linen, profusely trimmed with old point lace, and seemed not more than sixteen or seventeen years old … subsequently a memorial slab was laid over the remains of Lady Audrey, by the late Lord John Douglas Scott.’

Does anyone know who the beheaded man TB could have been?

Kelly’s Post Office Directories for Warwickshire can be consulted at the Warwickshire County Record Office who have a series (once every four years) for the second half of the 19th century and the early part of the 20th century; the quotation comes from page 156.