You are here: Home>Locations>Warwick>Anne Greville's Notes on Flowers and Gardens 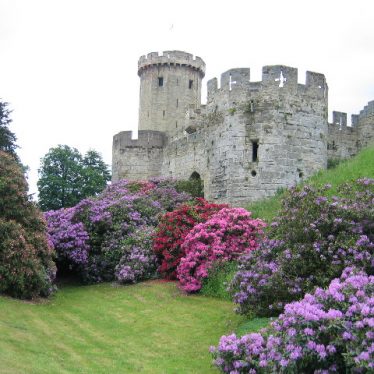 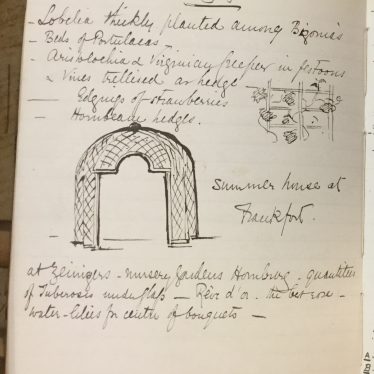 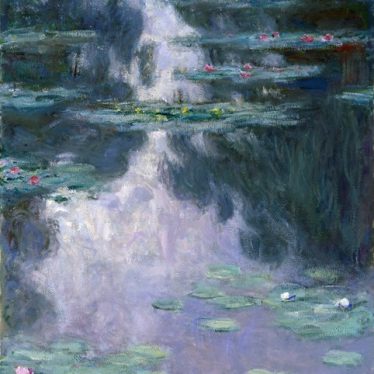 Monet's Water Lillies. Sourced from the same botanists as used by Anne Greville for Warwick.
Public Domain Image released by the Museum of Fine Arts, Houston

This handwritten book of notes on flowers and gardens was compiled by Anne Greville (1829-1903), née Charteris, 4th Countess of Warwick. It records, with a phenomenal attention to detail, the various plants and gardens features that she admired during her travels between 1880-1890. This includes those seen in the Countess of Morley’s Garden in Devon, nurseries kept by the famous horticulturist Arthur Veitch, and the various pavilions and features seen at the Palace in Frankfurt.

Rhododendrons, a hardy and particularly pretty flowering plant made popular during the 19th century, feature heavily within Anne’s notes. Meticulous descriptions of the colours of their flowers, including those such as coppery yellow, deep lemon, salmon shaded peach and canary yellow, profess Anne’s interest in the decorative effects of these plants. As a talented artist, it is entirely conceivable that the Countess approached planting in the same manner in which she painted in oils and watercolour.

Moreover, the book also records the various plants that Anne had purchased for Warwick Castle. Both Anne and her husband George had commissioned the notable gardener Robert Marnock (1800-1889) to plant new Italian and Tudor style formal gardens at the castle in the late 1860s. It seems that Anne also took a very practical interest in plants, as she confessed to her husband in June 1865 at having been budding roses in the castle nurseries till quarter to nine at night.

The connection between plants and artists deepens even further. A receipt in Anne’s papers shows that she was also importing into Warwick vast amounts of water lilies from the famed Parisian botanists Latour-Marliac. It was their exciting new water plants that attracted none other than Claude Monet in 1889, and is said to have inspired this painter’s obsession with painting the flower. How curious that both Monet’s legendary jardin d’eau at Giverney and Warwick Castle sourced their water lilies from the exact same company.

Photographs from this period attest to how the Earl and Countess allowed plants and trees to envelop their ancient home. In the most romantic fashion, this arrangement created the effect that Warwick Castle’s stone towers and ramparts had truly become a part of nature and the surrounding landscape.

The surviving Rhododendrons, descendants of the ones which Anne must have planted, are in bloom during the early summer. Make sure you don’t miss them!

Linkedin
More from Warwick
More from Estate Parks and Gardens