You are here: Home>Locations>Haseley>Growing up in a Warwickshire Filling Station: A Change and the End

Growing up in a Warwickshire Filling Station: A Change and the End 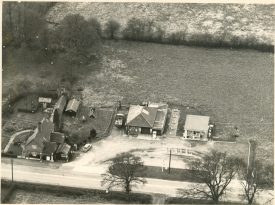 This aerial photograph of Haseley Filling Station was taken some time in the early 1960s. My first car, the grey Ford Anglia, can be seen near to the original shop.
Image courtesy of RT Bolton. Warwickshire County Record Office reference B.HAS.Bol(P) 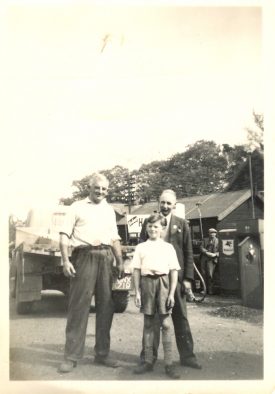 The late 1950s saw a change in the way petrol was retailed, whereas in the late 1920s and early ‘30s it was not unusual for filling stations to have a different brand of petrol in each pump, it was now usual for one company’s to [be] the only petrol available on site – these were termed ‘solus sites’, for tying a filling station owner into this type of contract, which would be for a set period of years, there were obviously advantages to the owner, mainly in the form of better discounts on the supply of petrol and oil and favourable loans to update premises.

On the new site [my father] agreed to only sell Cleveland petrol and I think they were able to let him have a loan to carry out the work. […] After a short period – may have been only a year or two – my father became aware of a petrol Company [Jet Petroleum, based at Immingham near to Hull] being able to sell petrol at a lower price than the major companies. […] Representatives of Cleveland Petroleum weren’t over impressed with my father changing supplier but he would be the last to worry about what large companies thought.

Being able to offer petrol a few pence per gallon less than the competition did wonders for sales and turnover increased considerably, motorists came from a wide area to fill up with the lower priced petrol.

The end of the filling station

In around 1960, National Benzole – owned by Shell – put in an offer [for the business] and this was accepted by my father, who, as an after-thought, told them that the house was not included in the sale. The selling price was £35,000 […] After the sale my father and brother Peter leased the filling station back from National Benzole.

In around 1965-66 the family association with Haseley Filling Station came to an end. During the early years the garage was the centre of the universe, all sorts of people called, some stayed a little longer after purchasing something and treated it as a social occasion, whilst others were easily observed as they drove by.

This article is an abridged section from the memoir Four Gallons of Petrol and a Pint of Oil. The full version can be seen at Warwickshire County Record Office, reference B.HAS.Bol(P)