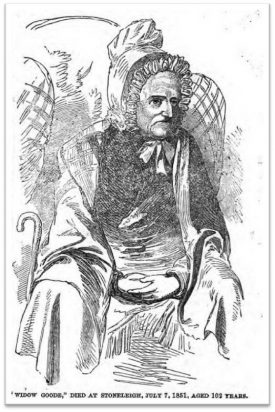 Sarah Goode, as sketched in the newspaper.
Image supplied by Sheila Woolf 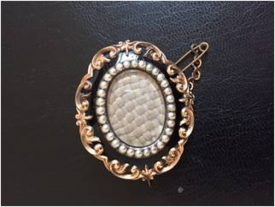 The mourning brooch pictured was a very generous gift to the Stoneleigh History Society from a relative of the person commemorated. These brooches were fashionable in the mid 19th century and became especially popular after the death of Prince Albert. Ours dates from 1851, and is particularly interesting because we know a great deal about the lady whose hair has been preserved.

Sarah Goode, nee Parsons, was born in February 1749 in Berkswell, to Jonathan and Ann Parsons, and according to a newspaper article was the youngest of 12 children. She was married to John Goode on 10 February 1783 at Coventry St John Baptist, and went on to have four children though one, William, died as an infant. Her two surviving sons became wealthy upholsterers and cabinet makers in London. The couple lived in Stoneleigh throughout their married life, and both were to be buried in the churchyard. The date on John’s tombstone states that he died on 22 June 1833; he was buried on 26 June, aged 81.

The 1841 census shows that after her husband’s death Sarah was living with her widowed daughter Jane, whose husband John Whitehead had been responsible for the fine carpentry work in Stoneleigh church during its refurbishments some 20 years earlier. It appears that Sarah kept a lodging house and possibly also a shop, in Stoneleigh. It was in this capacity that she achieved a certain local fame, when she spoke up on behalf of the Leigh family during the infamous Leigh Peerage case, at which time she commented on the deaths of certain masons who had lodged with her.

Sarah died at the age of 102 on 7 July 1851 and was buried at Stoneleigh on 11 July. Owing to her great age and the impression she had made during the court case, a newspaper article characterised her life, stating that she had been a tenant of the Leigh family for 52 years. More remarkably, it was accompanied by a sketch of Sarah, thus giving us a rare visual glimpse of the appearance of an ordinary Stoneleigh woman at that time.

The article states that she:

rarely experienced any of the pains which are so frequently the companions of advanced life; she was in possession of every faculty; walked well; was surprisingly quick in catching up the slightest word addressed to her; she had good eyesight and her memory was wonderfully retentive, rendering her conversation very interesting. She was remarkably gentle in her disposition, even and cheerful in her temper, and expressed herself much pleased with the visits of strangers. In April 1849, after she had attained her 100th year, she went to Warwick and gave clear evidence at the assizes held in the town…when she excited the astonishment of a crowded court by the intelligence of her replies.

A copy of the article was framed and still hangs in Stoneleigh Abbey.

The brooch is of 9 carat gold and the plaited hair lies within a glass front surrounded by 31 seed pearls. On the reverse it is engraved: