You are here: Home>Locations>Kenilworth>Global Superstars Laurel and Hardy Arrive in Kenilworth 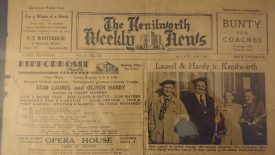 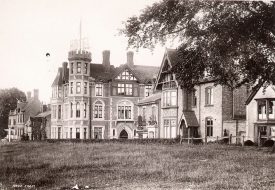 Some years ago, I was kindly given a copy of the Kenilworth Weekly News by someone who recalled the time when Laurel and Hardy came to Kenilworth and were on the front page. They saw them arrive there and knew I was a big fan of the comedy duo, so gave me the newspaper.

The front page of the paper, dated August 30th 1947 (Volume 1, No. 65), describes the excitable scenes at Coventry Station when they arrived :

The front entrance was thronged with people, the platforms were crowded, and it was with great difficulty that these popular comics forced their way through the crowds and left the station by the rarely used Warwick Road entrance.

Once they started on the Warwick Road (“traffic was practically at a standstill..” – imagine that happening 60 years ago!) the entourage made their slow progress towards Kenilworth, where they were staying at the Abbey Hotel. The reception at Kenilworth was “comparatively quiet” with only a few dozen there to greet them.

The front page picture showed them both (“the famous American film comedians” – though we know that Stan was one of our own British stock) with their wives on their arrival at the Abbey Hotel. It has been suggested to me however, that Oliver (“Ollie”) went on to stay in a hotel in Leamington.

The world famous comedy duo were appearing twice nightly at the Hippodrome Theatre in Coventry with Harry Moreny doing a sketch called “Getting a Driving Licence”. This was the sketch they had chosen to entertain the troops during the Second World War. The Kenilworth Weekly News noted also that they were the first American artists (see previous note!) to entertain at army camps. To mention only one of their tours, they travelled over 14,000 miles in the Caribbean area alone.

What could have been

For the Laurel and Hardy fans, the paper stated that they had originally planned to make a film version of “Robin Hood” while over here but, owing to the script needing much external work and the uncertainty of the English summer, it was decided to abandon the project. What a shame!

The rest of the year was mapped out for this busy pair:

Shortly they are due to appear in Copenhagen, Stockholm, and Oslo, then follows a month in Paris. South Africa and Australian tours are now being arranged but they hope to be back in England to appear in the pantomime “Babes in the Wood” at London around Christmas, 1948.

The final footnote said that in a press reception after their first performance at the Hippodrome they were asked their opinion of the 75 percent Film Tax in America. Typically polite, Oliver stated he only knew what he read in the papers.

Coincidentally, this year [2017. The film was released 11th January 2019] sees a film being made starring Steve Coogan as Stan and John C Reilly as Ollie. The film looks at when this famous pair toured the theatres in Britain in the early ’50s.

I treasure this yellowed copy of the local newspaper, when my all time favourite comedians came to town.

Linkedin
More from Kenilworth
More from Actors and Entertainers