You are here: Home>Locations>Nuneaton>Not an Alien! 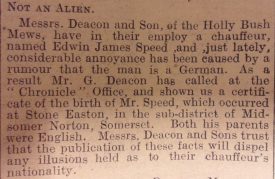 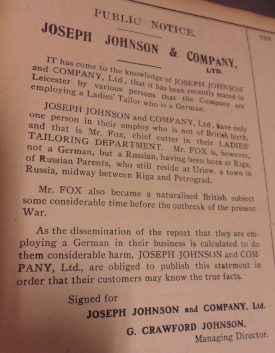 The Aliens Registration Act was introduced on 5th August 1914 and required anyone over 16 who was not a British Citizen to register at their local police station. Anyone who was German or Austrian was referred to as ‘Enemy Alien’ and it was feared they could be spies. They had to supply details such as their name, address, marital status and employment details. ‘Enemy Aliens’ of military age were interned, whilst others were repatriated.

This caused people to start questioning each other’s nationality and rumours started to spread on who was an ‘Alien’ in their local community.

In the Nuneaton Chronicle on 30th October 1914, there are two notices from businesses clarifying the nationality of employees who were rumoured to be Enemy Aliens.

On Page 4 Column 5, “Messrs Deacon and Son, of the Holly Bush Mews” have confirmed that their chauffeur, Edwin James Speed, is English and both of his parents were English. They express that “considerable annoyance has been caused by a rumour that the man is a German”.

In the same newspaper, there is a public notice from Joseph Johnson & Company Ltd, who state that Mr Fox is “however, not a German, but a Russian, having been born at Riga, of Russian Parents, who still reside at Uriew, a town in Russia, midway between Riga and Petrograd.” Mr Fox is stated as being the chief cutter in their Ladies Tailoring Department and Joseph Johnson and Company Ltd, “are obliged to publish this statement in order that their customers may have the true facts”.