You are here: Home>Locations>Southam>Southam 'Old Mill' 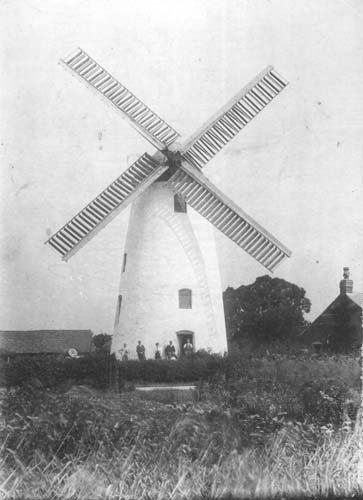 Southam 'Old Mill', the derelict remains of a windmill built in the Imperial period. Documentary sources suggest that a windmill may have stood at the site during the Medieval period. The site is located to the north of Mill Road, Southam.

1 Derelict truncated red brick tower cemented over, in poor condition, empty. Three storey. Dates from c1800. Rebuilt after fire in 1849. Had four storeys, four patent sails and three pairs of stones. Sails off 1923. Worked by steam, then oil, until after 1948. Dismantled and truncated by 1955.
2 A derelict truncated brick tower.
3 The available evidence indicates that this was the site of the original windmill dating back to the 14th century. References indicate the existence of a mill in 1332 and 1382 and later references also occur.
4 The site has been largely demolished. All that remains now are several brick courses standing to a height of no more than 1m.