You are here: Home>Locations>Warton>Site of Warton Mill 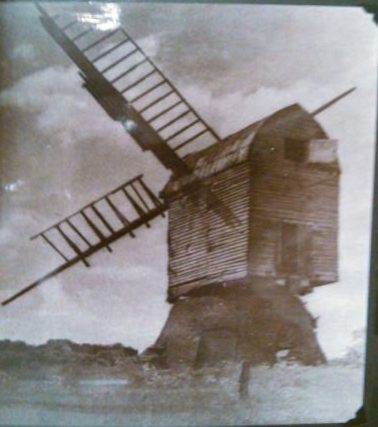 Warton Windmill.
Image supplied by Mary Eaton, given to her by a resident of Warton
Description of this historic site

The site of a windmill that was built in the Imperial period. The base of the windmill was built in brick. The site is 140m south of Orton Road, Warton.

1 Warton (SE). Built early 19th century. Ceased by 1910. Demolished c1923. Post mill, with Midlands style round house. SK2803.
2 This is a post mill, with a base of brick, with the upper part being weatherboarded. On a photograph of 1891 in the Birmingham Reference Library it is recorded that this mill is known as BOWLEY’S – the name of the miller who still uses it. SK2803.
3 Marked at above grid reference.
4 There are no surface traces of the mill.