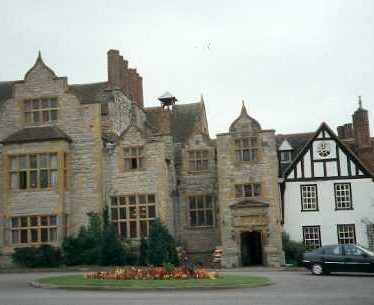 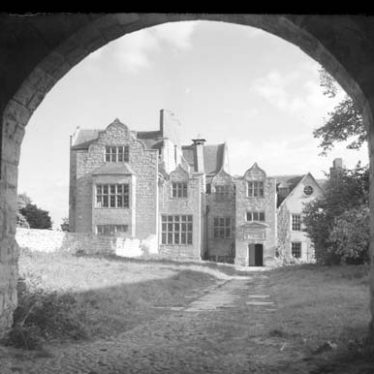 Salford Hall, a house which was originally built during the Medieval period. It is situated in Abbott's Salford.

1 Country house, now a hotel. West range is late 15th century and is probably part of a house built for the Abbots of Evesham. North and east ranges dated 1602.
2 Description of the building with a plan.
3 Quite a large stone house in the Elizabethan style. The entrance is through a gatehouse with a timber-framed gable (herringbone struts). The N front has the porch, dated 1602 (wrongly restored as 1662), leading to a small hall with a square bay window matching the porch in plan. Both [this] and the recessed hall centre have shaped gables. The bay is of five lights with two transoms. To the W is the service wing, with three big chimneybreasts and a tower-like projection. The upper part here is timber-framed. This W range is supposed to be in its masonry of before 1500. The E wing has (or had) the principal rooms, two large chambers. The E front is much more monumental than the entrance side. Three three-storeyed bay windows with shaped gables, and the two-storeyed parts lying back between them. The windows are of five and four lights and transomed. The main staircase (with a solid newel) is in the inner angle between the hall and this wing.
4 Evaluation to the west side of Salford Hall revealed a series of undated pebble surfaces cut by pits which may have been contemporary with the late 15th or 17th-century phases of the manor house. Other undated features included a cobbled surface, a stone wall and a steep sided gully aligned parallel to the Hall which possibly represented garden features.