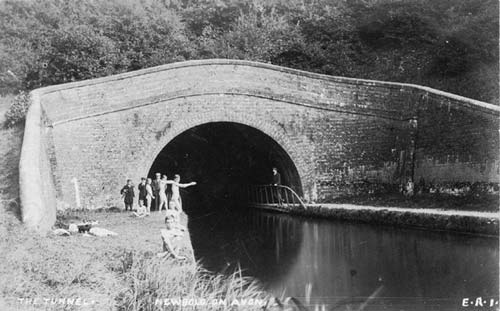 The site of a canal tunnel, a tunnel with a canal running through it. It dated from the Imperial period but is no longer visible It was located on the Oxford Canal, 350m north of St Botolph's Church.

1 This is the location of the new Newbold tunnel. The position of the original tunnel, on the line of the canal before it was straightened, is difficult to locate. “The new 204 yard tunnel at Newbold was a really magnificent structure built to dimensions capable of dealing with a considerable increase in traffic. It is a lofty 14 foot 4 inches from water level to the crown of the arch, and its width of 24 foot leaves room for a 3 foot 8 inch towpath on each side of the 14 foot 8 inch wide water channel…the portals were constructed with long ramps on each side making them each into an unusually long roving bridge. Unfortunately 83 yards of brickwork soon started to spoil and had to be cased with a blue brick in 1847.”
2 No sign of the old tunnel could be found. The new tunnel is in good condition and remains in use.