The Oxford Canal at Newbold on Avon 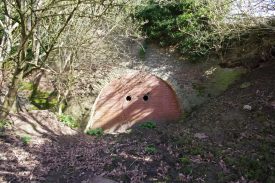 The old tunnel at Newbold (now bricked up), 2014.
Photo by Benjamin Earl. 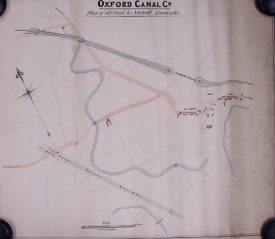 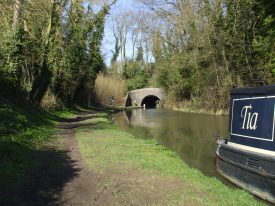 The Newbold Tunnel was built in 1829, and is a familiar landmark along the Oxford Canal around Rugby. The two pubs, the Boat  [now closed] and Barley Mow, are perpendicular to the canal and this hints at the changes to the route that have occurred over the years.

The modifications were completed in 1834, and the current route of the Oxford Canal is part of works to shorten the route by 11 miles in response to proposed competition from a rival canal. Although the rival was never built, the improvements to the Oxford Canal were made anyway, including the 250 metre long tunnel used today.

Clues to the canal’s previous route can be seen by the orientation of the two pubs, that previously ran alongside the canal and the south entrance to the original tunnel (built in 1777) can still be seen in St. Botolph’s Churchyard. A favourite visit for schoolchildren’s projects of a certain vintage, the tunnel was still open until recently and served as a rudimentary cow shed. Now, however, the tunnel has been bricked up, with two holes for bats to enter and exit. The indent in the landscape also shows the path of the original canal route, that can be followed past the church.

People behind the canal

The Act of Parliament that authorised the Oxford Canal was passed in 1769, and was championed by the chair of the canal company, Sir Roger Newdigate of Arbury, and MP for Oxford University. James Brindley (immortalised in modern day developments such as Brindleyplace in Birmingham) was original engineer for the canal until his death in 1772, when his assistant Samuel Simcock took over. Financial problems meant the work was often slow.