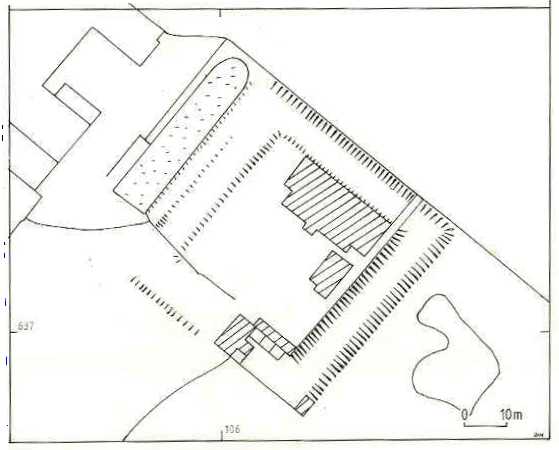 A plan of Netherstead Moat, near Morton Baggot
D. Hooke
Description of this historic site

Netherstead Moat, a wide ditch ditch usually surrounding a building. It dates to the Post-Medieval period, and remains partially visible as an earthwork. It is situated at Netherstead, Morton Bagot.

1 16th century timber framed house.
3 In the 17th century this house was at the nucleus of a sub-manor of Morton Bagot, representing part of the holdings of the Holyoak family. The moat is rectangular in shape and may have fulfilled more of a status function in this instance. It is now dry but clearly visible, especially on the NE and SE of the house. At the front of the house it has been partly filled in by the construction of an access road and outbuildings, and on the NW has been partly destroyed by gardening. A linear pond lying parallel to the moat on the NW side appears to be a modern feature.
5 The moat is about 8-11m wide and 0.6 to 2m deep and is partially revetted. The moat is still deep on its SE and NE sides, but on SW and NW is only a shallow depression.
6 Described.
7 Archaeological observation of trial trenches excavated through the presumed medieval moat of Netherstead Farm was able to determine that the earliest extant cut of the moat was 18th/19th century. The base of the moat ditch was lined with domestic rubbish of 18th/19th century date and only two residual medieval pottery sherds were recovered from the site. An 18th/19th century brick stable/barn with a cruck frame that straddled the moat in the position of a gatehouse may hold the key to determining if an earlier moat had previously existed. A further trench machined through the internal platform, adjacent to the house, revealed a sequence of make-up layers of post-medieval or later date.
8 Later work identified the original medieval moat and the remains of a wooden bridge preserved in anaerobic conditions at the base of the moat.
9 Drawing of the moat bridge.