Mound for rotunda at Alscot Park 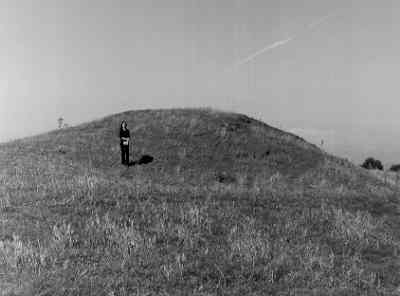 A mound, possibly once the site of a tower, Preston on Stour
Warwickshire County Council
Description of this historic site

A mound is visible as an earthwork within Alscot Park. It has been suggested that an octagonal tower or rotunda of Post Medieval date stood on the mound. It is situated 600m south west of the church at Atherstone on Stour.

1 A lofty erection (the Rotunda) stood on a mound of earth still remaining to the E of the footpath across the park leading to Atherstone. It had an octagonal tower with domed roof; the alternate sides of the octagon were pierced with arches, the other four being filled in. In the second storey were round-headed windows, the total height from floor to dome was 15m. The Rotunda was standing within the memory of Widow Gaden.
2 A substantial mound about 2m high and 2-3m broad. A hollow on the E may represent the remains of a quarry. This is possibly the mound on which the Rotunda stood and this location correlates with the proposed location of the Chinese Temple (PRN 1594).
3 One of the garden buildings erected in the early 1750s by James West. Now destroyed (p159).
4 Suggests this mound was the site of the summerhouse, not the rotunda.