You are here: Home>Locations>Hunningham>Moated Site 200m SW of Church 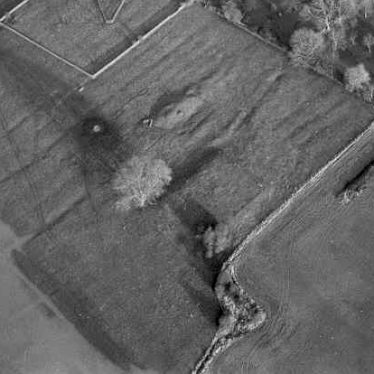 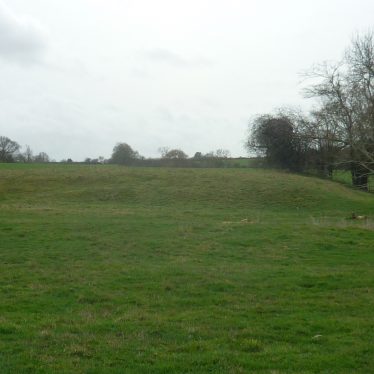 Moated Site 200m SW of Hunningham Church. Looking at the north face towards the platform. 2019.
Image courtesy of William Arnold 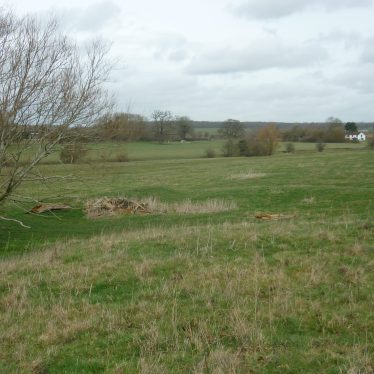 A Medieval moat, a wide ditch usually surrounding a building, which has been part excavated, and is visible as an earthwork. Occupational debris from the 13th century was found. It is situated 150m south west of St Margaret's church at Hunningham.

1 Small rectangular earthwork surrounded by a moat. The island is practically a square with sides about 24m long. The ditch on the SW and SE is about 3.6m wide and 1.4m deep but on the NE it is more than double that width and appears to be continued in a SE direction. The NW side is open, the bottom of the ditch being almost as low as the flat and moist meadow. A few trenches were dug in 1925 but nothing in the nature of foundations was found. A few pieces of Medieval pottery were found, including one of green glaze.
3 1978: Excavation began. The platform, which has no traces of building, is raised 1.5 to 2.5m above the surrounding field. The topsoil has been removed from about one third of the platform and some building and occupation material found.
4 1979: About two thirds of the platform has been stripped but there is no clear evidence of buildings. Building stone, tiles and nails have been found. Small quantities of Medieval pottery and oyster shells have also been found. A section across the moat showed that it was shallow and flat bottomed, nearly 9m wide and 1.6m deep. A small amount of cooking pot, probably 13th century, was found in the primary silt. The platform is derived of sand and gravel from the moat.
5 1980: The evidence suggests a Dutch barn with walls of timber based on stone blocks and a roof of timber and tile. The pottery is broadly 13th century. A buried soil has produced Neolithic and Roman finds (PRN 6005, 6006). On the NE of the moat is a possible entrance and a revetment of limestone blocks along the edge of the moat.
6 1981: Traces of a second possible small building have been found.
11 MSRG report.