You are here: Home>Locations>Henley-in-Arden>Market Cross in Market Place, Henley in Arden. 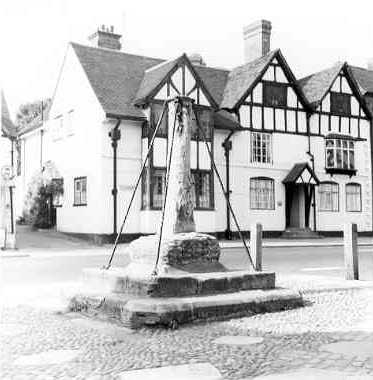 The remains of a Medieval market cross which stands 100m north of St John's Church.

1 The base, shaft and capital are composed of 3 separate stones; the shaft being morticed into the base and capital. On the 4 faces of the capital were niches, containing, 1. The Rood; 2. The Trinity; 3. St Peter with his key; the 4th has fallen away. The head of this ‘highly superstitious’ cross is reported to have been preserved from destruction by having been covered by a shed for many years.
2 The empty niche probably once contained the Virgin and child. Towards the end of the last century a heavy iron palisade was erected around the cross for protection and at a later date the shaft was secured with iron supports. New iron railings were set up prior to 1933.
3 Square socket on 2 steps. Octagonal shaft changing to square where it enters the socket stone.
4 The head was in situ in 1863 but had fallen by 1894. The cross has been much restored.
5 The complete shaft, (head missing), octagon base and steps, all considerably weathered. The shaft is supported by iron stays.
7 The iron railings have now been removed, but the iron supports remain. The stone of the shaft is flaking away, but the base is still in fair condition.
9 Listed building description.
10 Letter from the DoE about proposed repairs.
11Monument boundary moved to actual position.