You are here: Home>Locations>Ansley>Cross in Ansley Churchyard 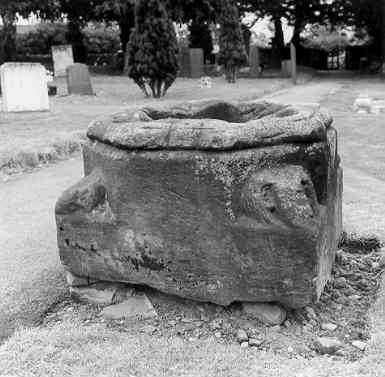 The base of a Medieval cross is situated in the churchyard of the Church of St. Lawrence, Ansley.

1 Situated on S side of side path to parish church. Octagonal socket stone, no shaft, diametrically opposed corners show signs of being carved with emblems of the four evangelists. Probably by the same workman as Over Whitacre Cross (PRN 81).
2 In the churchyard is a 15th century base of a churchyard cross. It is octagonal with a moulded top edge. It has square base-stops on which are badly worn heads of four men and women, the features entirely obliterated.
5 Photographed in 1977.
6The socket-stone is made of sandstone. It rests on the ground and does not appear to be earthfast and stones have been wedged under the corners of the roughly dressed underside suggesting that it has been moved.It is not clear that this stone represents the remains of a cross base, the size of the socket and the carvings suggest that this may have been a font base, which was subsequently re-used. The present font in St Laurence’s church dates from the late 19th century which may indicate that the old font base was moved from the church at that time rather than prior to the Reformation when it may have been re-used as a cross base.