You are here: Home>Locations>Austrey>Medieval Village Cross to SE of Austrey Church 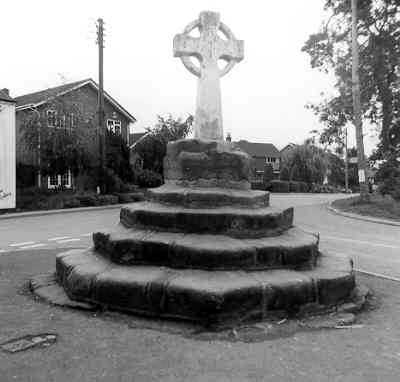 The site of a wayside cross, a cross by the side of the road. It comprised an octagonal base and five steps. The cross has its origins in the Medieval period and is situated south east of Austrey Church.

1 In the roadway SE of the church are the stone base and four steps of the ancient village cross, all of octagonal plan. The cross itself is modern, erected to commemorate the Diamond Jubilee of Queen Victoria in 1897.
2 Square-octagonal socket stone on four steps.
3 Remains of a Medieval village cross consisting of a large base on a plinth of five steps – modern macadam has, in part, buried the lower step.
5 Photographed in 1977.