You are here: Home>Locations>Kenilworth>Kenilworth Abbey Guesthouse 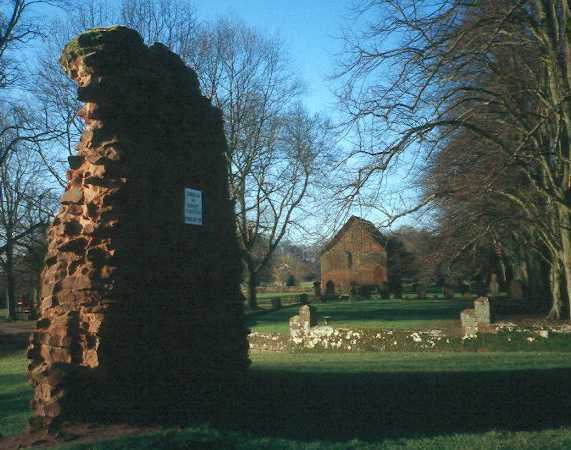 Kenilworth Abbey Guesthouse was built as a two storey building during the Medieval period. It has not been definitely proved to have been the guest house. In its later history it was used as a cowshed. It is situated in Abbey Fields.

1 The Guest House is a building of two stories, which formerly had an outside stair and a porch over the S door. The upper storey has two-light ogee-headed windows. This building is tentatively identified as the Guest House.
2 The ‘Barn’ or Guest House was erected at about the same time as the Gate House (ie 14th century). The interior has been used as cow sheds and is now a storehouse for carved stonework and tiles found during the excavations.
3 Scheduled as Warwickshire Monument No 10.
4 Listed Building Description.
5 A domestic building of 14th century date of sandstone originally with an upper floor 2.4m from the ground. One of the gable ends is of timber filled with brickwork. The building is in need of repair.
6 Excavation of test pit in June 1994 revealed stone flooring and masonry associated with the gatehouse. The small size of the test pits meant that no firm conclusions could be drawn.
7 Description by Kenilworth Historical and Archaeological Society.
8 Ref 7 unlocatable, CHS 08/04/97.
9 Field Survey Form.
10 Ref 9 unlocatable, CHS 08/04/97.
11 Constructional and architectural details of the timbers of the roof suggest that present roof is not original but a later replacement of reused beams. There is a suggestion that the roof was lost in the civil war. Tree ring dating suggests that the roof is made from up of timber reused from two different sources. Dates: fist site chronology 1427 to 1573, second site chronology 1409 to 1560. Feliing dates 1578-1603 and 1569-1594 respectively
12 A report on a metal detecting survey at the Barn states that its south face, in particular, is peppered by weapon fire.
13 The site is within the Scheduled area of the SAM of Kenilworth Abbey (Monument Number 35115).
14 Ground probing radar survey within and around the Abbey Barn identified probable subsurface structures which may have been of archaeological significance. The survey aimed to determine any anomalies which may have indicated the cause of subsidence observed within the floor of the Abbey Barn. Buried horizons outside the Abbey Barn indicated possible former ground surfaces and inside the barn a possible former floor. High activity areas observed in the timeslice plots formed patterns which suggested possible subsurface structures. An area of subsidence observed at the rear of Abbey Barn was characterised by broad crested anomalies and moderate activity in the time slice plots. There was no apparent evidence for the cause of the subsidence such as voiding.
15 Article in serial Kenilworth History 2011 by Harry Sunley, entitled The Barn: guest house, a fish house or what?, describing his belief that the upper part of the Barn may have been used as the prior’s dining hall during the prior-ship of Thomas Warmington (1312-45) and that consequently the lower level may have been used as a buttery, larder and pantry. This belief is based primarily on his interpretation of an entry in the chronicle of the historian John Strecche, a fifteenth century canon of Kenilworth, describing the erection of a prior’s hall during Warmington’s time as prior.