You are here: Home>Locations>Quinton, Lower>Iron Age Hillfort at Meon Hill 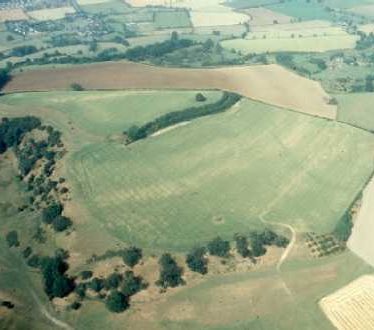 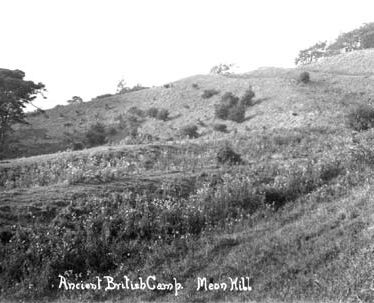 An Iron Age hillfort on Meon Hill, the remains of which are visible as earthworks. Excavation and site surveys have recorded the layout of the ramparts and internal features as well as producing a variety of finds.

1 At an elevation of 194m on the flat top of a hill conspicuous for miles around. Originally the hill was encircled by a double line of defences. In 1906 these were best preserved on the SW and SE. On the E the rampart had been levelled by ploughing and a gap in the W is probably the result of a landslip. At the SE the ditch/bank is up to 4.6m deep. In 1906 the interior was divided up into a N (ploughed) and a S (unploughed) field. Many artefacts were found in the ploughed interior. These included Neolithic/Bronze Age finds (PRN 5456, PRN 5457) and fragments of ‘Neolithic’ – probably actually Iron Age – pottery. In 1824 a large hoard of 394 currency bars was found (PRN 5458). Romano British finds have also been made (PRN 5460) along with three ?Iron Age whetstones. An excavation was carried out in 1906 (PRN 5459). On the summit of the hill in undisturbed grassland were six or so slightly saucer-shaped depressions 4.3m to 6m in diameter. One of these was excavated and proved to be a hut (PRN 5459).
2 Further excavations were undertaken in 1922. He found much Romano British and earlier pottery, and one or two pieces of bronze and flint.
3 Major hillfort of impressive proportions. A fine entrance in the W face, but a break in the S defences seems quite modern.
4 Scheduled as Warwickshire Monument No 71.
5 A survey was conducted to record the topography of the ramparts, field walk the interior and catalogue/publish previous finds. The ramparts enclose 10.4 ha. Around the S side is a double-ditched rampart with a counterscarp. On the E the ramparts have been completely ploughed away. On the N there is a single bank and ditch. On the NW slope all the defences have been destroyed by landslipping. There are two possible entrances on the E and NW – the latter could be modern. Today the whole of the interior is under plough and there are no traces of the pit dwellings. The finds are in Cheltenham Museum and include Neolithic and Bronze Age material. Iron Age finds include a rotary beehive quern on the surface at the SE corner of the S field. Field walking of the interior produced a sparse scatter of Iron Age pottery, animal bone, fired clay/daub, fire-cracked pebbles and possible sling stones. Pottery is uniformly shell-tempered. A Saxon burial has also been found (PRN 5461).
6 Iron Age pottery from the 1906 excavations dates to Marshall’s phases 1-2 of the Iron Age.
7 Meon Hill Camp, multivallate, 24 acres enclosed. Original entrances not clear. Hoard of currency bars found within camp.
8 Air photograph.
9 Rescheduled as SM 21551.
10 Photo taken c1920.
11 Schedling list from 1986.
12 Correspondence about the state of the site in 1968.
13 List of the contents of a box of finds.
14 Correspondence from 1986 reporting the find of an Iron Age quern stone.
15 Correspondence about motorcycle damage to the site.
16 Letter from EH about the site.
17 Secondary record card with list of finds.