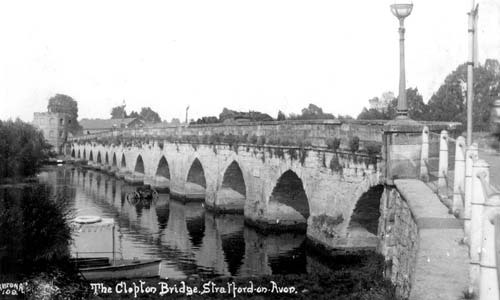 Clopton Bridge, which dates back to the Medieval period. It was built in the 15th century to replace the earlier timber bridge. This bridge was made of stone with 14 segmental pointed arches. It was widened in 1814. It crosses the Avon at Stratford on Avon.

1 Leland records a ‘poore bridge of tymber’ which was replaced by Sir Hugh of Clopton (d 1497) by this great and sumptuous bridge. It has fourteen great arches of stone and a long causeway at its W end. In 1645 Parliamentary troops broke down the second arch from the E end. In 1814 the bridge was widened and a stone pillar which stood on the third pier from the E end, which bore an inscription, unfortunately destroyed. The octagonal building attached to the W side of the bridge is supposed to have been a toll house.
2 First mention is in 1235. Other references occur in 13th and 14th centuries. The 15th century stone bridge consists of fourteen segmental-pointed arches; on the NE side the cutwaters have been retained to support the arches of the widening made in 1914, but on the SW side only traces remain. There were originally five more arches to the N which carried the causeway leading to the town. Various repairs and alterations are recorded.
8 Listing description.
9 Monitoring of 2 trial trenches on Clopton Bridge revealed no trace of the bridge itself.
10 Letter from EH to the WCC in 1990 about repairs to the bridge.
11 Letter from the Dept. of Culture to Severn Trent about their proposed works at the bridge.