You are here: Home>Locations>Sherbourne>Church of St Peter, Sherbourne 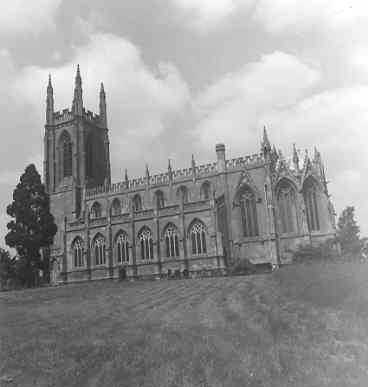 The Church of St Peter was built during the Imperial period near the site of the original Medieval church. It is an early example of the Gothic Revivial movement and it stands in Sherbourne.

1 Chancel, nave with clearstorey, N and S aisles, N porch and W tower. 1826 by T Rickman, with E end remodelled in 1858 by Sir Gilbert Scott, who provided the chancel with an apsidal end; he also refurnished the church. Interesting as being one of the earliest and best examples of the work of the 19th century ‘Gothic Revivalists’.
2 1822-6 by Thomas Rickman and Hutchinson. Ashlar, with a high W tower with unusually high pinnacles. All is very profusely decorated. Chancel has polygonal apse of 1856 by Scott.
3 Photo.
4 Noted by Ordnance Survey.
5 A service trench was was dug along the north side of the church in the late 1990s.

email
More from Sherbourne
More from Chapels and Churches