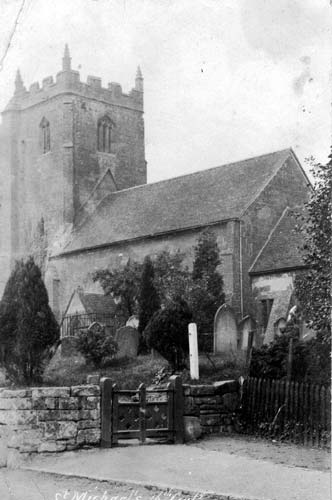 The church of St Michael was built during the Medieval period with some work carried out in the 16th century and a vestury built more recently. A drawing of the church from 1820 exists. It is situated in Weston under Wetherley.

1 Chancel, N chapel, nave, N aisle, W tower, vestry, and S porch. Evidence for a 12th century church in the chancel N and S walls, consisting of the E halves of two semicircular-headed blocked windows. Church almost entirely rebuilt early in the 13th century; the tower was built early in the 14th century, except the top stage, added late in the 14th century; N chapel built in the 16th century, and in modern times a vestry and S porch. Of red sandstone ashlar. Font probably early 14th century. 16th century monuments in N chapel.
2 Plan of the church.
3 Drawing of c1820.
4 The church has a 13th century aisle in an uncommonly complete state.
6 Noted by Ordnance Survey.

Linkedin
More from Weston under Wetherley
More from Chapels and Churches