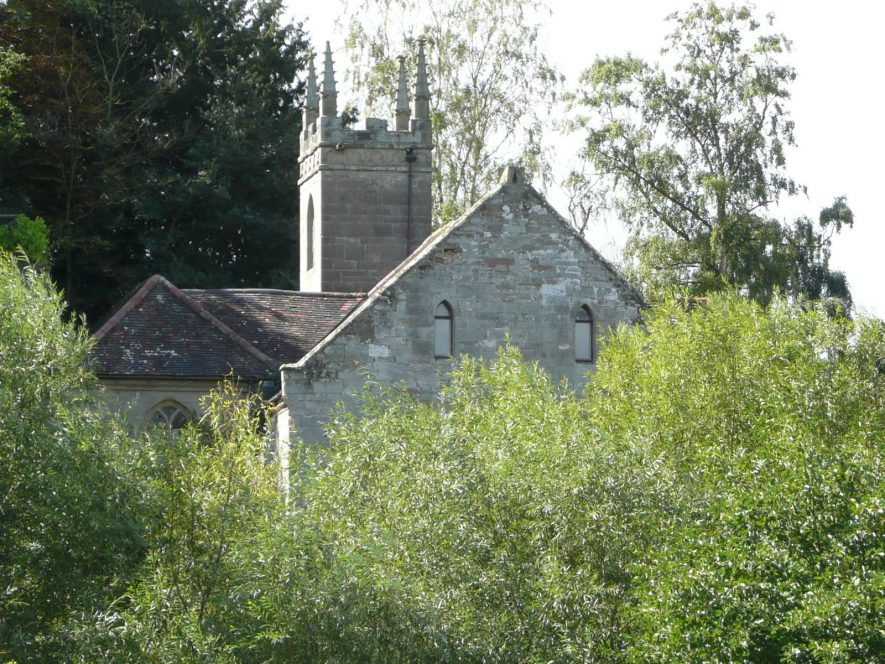 View of Chapel of St Mary Magdalene, Guy's Cliffe from across river. 2017.
Image courtesy of William Arnold
Description of this historic site

The Chapel of St Mary Magdalene at Guy's Cliffe, Warwick. It was built in the Medieval period, possibly in the 13th century, and rebuilt in the 15th century.

1 Chapel dedicated to St Mary Magdalene near the site of a hermitage (PRN 2233). In 1423 Richard, Earl of Warwick, was licensed to found a chantry in honour of God and St Mary in the chapel. The chapel and other buildings were rebuilt between 1449-50 and 1459-60. The chapel stands on a cliff W of Guy’s Cave and consists of two parallel aisles of five bays with a porch and small tower at the centre of the ‘S’ wall. Under the building is a rock-cut passage which was extended c1825 and fitted with a carved 15th century doorway from Wellesbourne Church. It is not certain when the chapel was first built but a lancet window uncovered in the ‘N’ wall in 1933 might suggest a 13th century date. The ‘E’ wall, base of the tower, the porch vault, and base of the arcade between the aisles are 15th century and there are various later alterations and additions.
3 Pevsner entry.
5 SAM List.
6 Notes on the cave, chapel, house, mill etc.
7 Notes.
8 Information from documentary research.
9 Drawings.
10 Letter about the owners’ maintenance of the site in 1982.
11 Revised scheduling.

email
More from Leek Wootton
More from Chapels and Churches