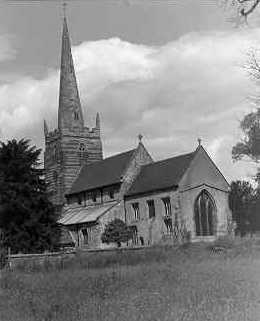 The parish church of All Saints, Ladbroke. Built in the Medieval period, this church was later completely rebuilt in the 14th century, and modified in the 15th century and 1876. The church is located to the north east of Hall Farm.

1 Chancel, nave, N and S aisles and W tower with spire. The 13th century church, which probably consisted of a chancel and nave, was entirely rebuilt in the 14th century; all that remains of the earlier church is the lower portion of the chancel. Late in the 15th century the nave and chancel were raised and clearstorey windows inserted. Restored and reroofed in 1876 by Sir Gilbert Scott. There was a priest here in 1086.
2 Drawing of c.1820.
3 Tall W tower of the early 14th century, crowned by a later recessed spire. Later 13th century chancel, early 14th century three-bay arcades and chancel arch.
4 OS Card.

Linkedin
More from Ladbroke
More from Chapels and Churches