You are here: Home>Locations>Alcester>Alcester Town Hall 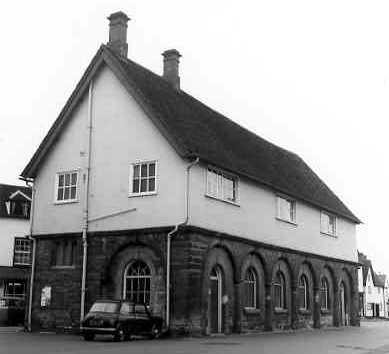 Alcester Town Hall, a building originally constructed during the Post Medieval period as a market hall. It is situated in the High Street, Alcester.

1 A 2-storied building of C17 date. The lower story consists of a stone colonnade, filled in in 1873, and was built around 1618, in which year Sir Fulke Grenville, lord of the manor, gave 300 pounds to build a Market House for the town. It was originally intended to build the whole in stone, but this was found to be too costly and it was decided to make the upper story of timber. This was not completed until 1641. The architect for the lower part was Simon White of Chipping Campden, who agreed to make 18 pillars for the colonade in his quarry there. The rest of the stone was from local quarries. The sides have 6 bays, the ends 2 bays, but the SW bay is solid. All the arches have been walled up. The upper story has original timber work covered in plaster. The windows are modern.
3 A plaque affixed to the town hall notes ‘rebuilt 1641’. The upper storey has been recently renovated.
4 Scheduled as Warwickshire Monument No 45.
7 Photographed in 1978.
8 De-scheduled in 1997.
9 Correspondence from 1985 about proposed work on the Hall.