You are here: Home>Locations>Ryton on Dunsmore>The Living History Markets, Ryton and Onley 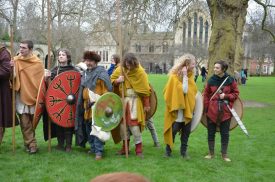 Viking re-enactors: 'I love your cloak pin, where did you buy it?'
Wendy Joyner 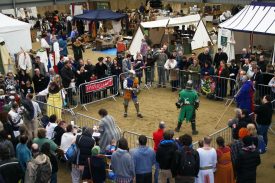 To people who don’t know me, they probably see a fairly ordinary 20-something woman. I doubt that they see a hardened sword-wielding Anglo-Saxon, a crackshot Scythian archer, or a competitive Thracian gladiator. Yet at times I have been all of these things!

As you may have guessed, I am a reenactor. I spend my weekends camped at castles in tiny dog-tents, cooking on campfires, hitting people with blunt swords and trying to engage the public in history. It’s an exciting and unique hobby, and groups are generally very welcoming to new members, lending them the clothes and equipment they need to get going. However, there comes a time when you want to start purchasing (or making!) equipment of your own. Where would you go to buy a flint and steel, a Victorian corset, authentic leatherworking supplies, a tricorn hat, a Roman medical kit, or a suit of armour?

Fortunately for me I live in Warwickshire, just 15 minutes drive away from two of the biggest living history markets in the UK.

In Ryton on Dunsmore you will find The Original Reenactors Market, held twice a year. This gathering of over 100 traders from across Europe has been running since 1990. TORM, as it is known, was originally founded in Oxfordshire, but has now settled in Warwickshire. Two huge sports halls are filled with stalls selling supplies, clothing and equipment for reenactors from every period, from Iron Age to World War II.

In Onley, near Dunchurch, you will find the National Living History Fayre. This was set up more recently in 2003 at the Warwickshire Exhibition Centre, and after some moves has settled back in Warwickshire. This market also hosts over 100 traders, and even offers the opportunity to camp on-site.

These markets are not just for reenactors; Live-Action Role-Players (‘LARPers’), museums, film companies, and members of the public with an interest in historical objects all flock there. By catering to such a broad audience, these markets overcome some of the divisions which can arise between these groups. Some of the items are thoroughly ‘authentic’ – replicas based on sound academic research, made with the correct materials, often using original techniques (although authenticity is the subject of much debate!). Others look the part, but are cheaper and simpler to produce – some seams may be machine stitched, or metals may be brass instead of bronze or gold. Others are history-inspired, but deliberately fantasy, such as the foam weapons used for LARP.

They also host historical displays and talks, which have included ‘through the ages’ fashion parades and medieval combat.

Wandering round the markets is always a treat and you never know what you’ll come across. It offers an insight into what happens ‘behind the scenes’ of the reenactment events you may see across Warwickshire and the UK. The opportunity to talk to the craftspeople, and to handle and use historical replicas (or even sometimes the real thing!) offers a tangible perspective on the past, which can’t be found in books and documents.

Warwickshire can be proud to host two such eclectic historical markets!

Linkedin
More from Ryton on Dunsmore