You are here: Home>Locations>Warwick>‘The Whereabouts of Elizabeth Wynn’: A Mystery of Dickensian Proportions

‘The Whereabouts of Elizabeth Wynn’: A Mystery of Dickensian Proportions 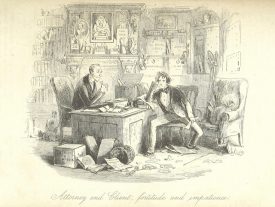 The arduous process of claiming an inheritance; an illustration from Bleak House by Charles Dickens
Illustration by H. K. Browne, Bleak House, 1853 (made available by the British Library) 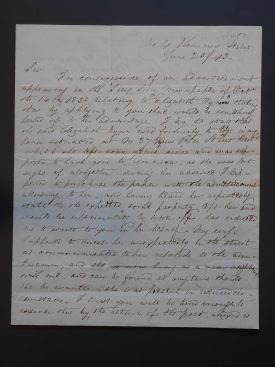 A letter from Samuel Probert to Mr. Greenway, Warwick, on the discovery of the whereabouts of Elizabeth Wynn, 1843
Warwickshire County Record Office reference CR1993/2 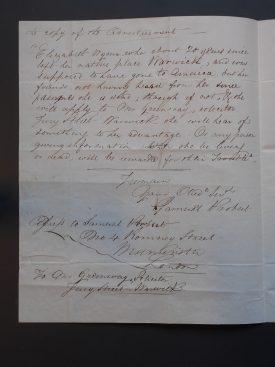 A letter from Samuel Probert to Mr. Greenway, Warwick, on the discovery of the whereabouts of Elizabeth Wynn, 1843
Warwickshire County Record Office reference CR1993/2

Picture the scene; the year is 1838, autumn is closing in. In the bustling streets of Victorian London we find Samuel Probert, a smith in his late 30s, purchasing a newspaper. This might not have been anything out of the ordinary for Samuel, except that today, he happens to notice a particular advertisement. It reads as follows:

‘Elizabeth Wynn, who about 20 years since left her native place Warwick, and was supposed to have gone to America, but her friends not having heard from her since presume she is dead; though if not, & she will apply to Mr Greenway, solicitor, Jury Street Warwick she will hear of something to hear advantage. Or any person giving information whether she be living or dead, will be rewarded for their Trouble.’

Elizabeth Wynn, now there’s a name he remembers. Samuel recalls how she lodged with him some years back, when he was living elsewhere in Westminster. She was in a poor way, but had repeatedly told him that she expected some property to be left to her, and would ultimately be better off. He hadn’t heard from her in years, but the rumour was that she was supposed to have travelled to America. Although he doesn’t suppose he’ll hear from her again, Samuel pockets the advertisement.

Fast-forward five years to the summer of 1843, and Samuel has long since abandoned hope of ever having cause to write to ‘Mr Greenway, solicitor’. His wife, however, has not forgotten the advertisement; thankfully so, because one day in the street, by total coincidence, she stumbles once more upon Elizabeth Wynn. As it turns out, Elizabeth is living very near to the Probert’s house at 4 Romney Street. Mrs. Probert is sorry to see that her circumstances are even further reduced. She eagerly tells Elizabeth about the advertisement, both curious and excited to know what this news ‘to her advantage’ would entail. When Samuel hears of their meeting, he resolves to write, finally, to Mr. Greenway.

But here, unfortunately, our story must come to an abrupt end. The letter that Samuel Probert wrote to Mr. Greenway has arrived in our archives and it describes the story as laid out above. Unfortunately there is no context to the document from which we could ascertain what happened next. It is a mystery, and one which is nothing short of Dickensian1.

Was this Elizabeth Wynn truly the person Mr. Greenway sought, or was this all pretence in the hopes of a misbegotten inheritance? Why did she leave Warwick, did she ever travel for America and if so, why did she return so many years later? Was she reunited with the friends who thought her dead? Was she ever contacted by Mr. Greenway? Did she indeed learn something to her advantage, and was it enough to pull her from the ‘reduced circumstances’ that she found herself in? Was there a large estate to be claimed, or was it so eaten up by legal costs that there was nothing left? Or perhaps there was never an inheritance, and this was simply a ruse by Mr. Greenway to ‘smoke her out’ from hiding?

I have not been able to find the answers, but I can’t help but feel that there must be documents out there (wills, probate, passenger lists, newspapers, parish and census records) which could shed some light on the story.

Do you fancy playing the detective and solving our mystery for us?

1 Interestingly, between 1832-1834, Dickens himself was actually a reporter for the True Sun newspaper in which Probert found the advertisement.

This article was the October 2017 Document of the Month for the Warwickshire County Record Office. Further articles can be found on their website