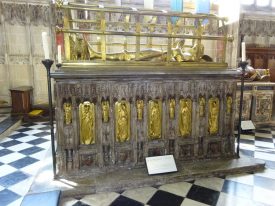 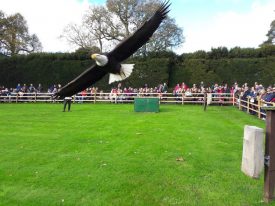 An eagle at a falconry display, Warwick castle, 2018.
Image courtesy of Benjamin Earl 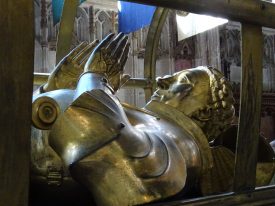 The Falconer’s Quest is the latest attraction at Warwick Castle. The tagline, “join Warwick’s Falconer on an epic quest of discovery to find the finest Birds in all the land,” may seem meaningless at first glance. However, behind the generic medieval music and dramatic prose, there is an ounce of truth to the story of a Warwick Falconer’s quest.

Six hundred years ago the household of the Earl and Countess of Warwick was the envy of England. Richard Beauchamp, Earl of Warwick (1382-1439) was a famous soldier, diplomat and scholar. He was ‘the flower of chivalry’ according to the Holy Roman Emperor, and his later biographer described him as ‘so manly behaved in language and nurture, that the king and his lords with all other people gave him great laud.’

He was also enormously rich. Various household account books between the years 1418 and 1423 survive and give an extraordinary insight into the Warwick household’s splendid living and spending. In 1423, the earl commissioned two new chariots and a new barge for transport. He spent lavishly on expensive silks and linen to make chapel vestments, and had a household filled with musicians, writers, scholars and training physicians.

In 1418, one such employee was Lewis the Falconer. He was an important member of the household, paid the handsome wage of £2 a year. Falconry was extremely popular among the nobility, and in particular ladies of the household who would often enjoy, and be encouraged to participate in, the sport of falconry instead of hard-riding hunting. With the earl abroad, Lewis was probably an important member of his countess, Elizabeth Berkeley’s household, at Warwick Castle.

The number of birds at Warwick must have been significant since Lewis had two assistants to help keep and maintain the falcons and hawks. In total, the household accounts contributed nearly £8 towards the board and maintenance of the falconers and birds. Yet, the 1418 accounts provide an interesting side-note to their daily routine.

In late 1418, Lewis the Falconer was paid an extra £2 to pay for travel abroad. He made the expensive trip into Saxony, with the direct order to purchase exotic birds of prey. Here, he purchase a number of hawks and falcons for Warwick Castle (the following year the cost for maintaining birds rose to £10).

Travelling falconers were deeply disliked. Goodman of Paris, a late 14th century chronicler, described them as ‘traitors and thieves to each other’, complaining of the competitive, ruthless nature of the falconry trade. At a time of hostility, war and disgruntlement towards English traders, Lewis’s success in procuring new birds was a sign of his procurement prowess, and one that marks the zenith of falconry at Warwick Castle.

email
More from Warwick
More from Trade and Tradespeople (General)