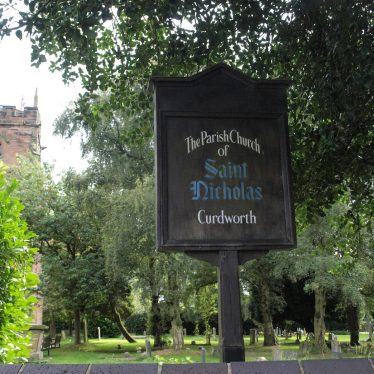 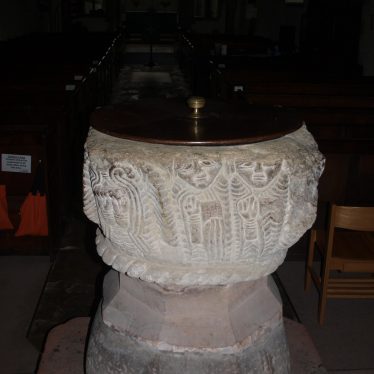 The top of the font has been cut down and some of the figures have heads missing.
Image courtesy of Caroline Irwin 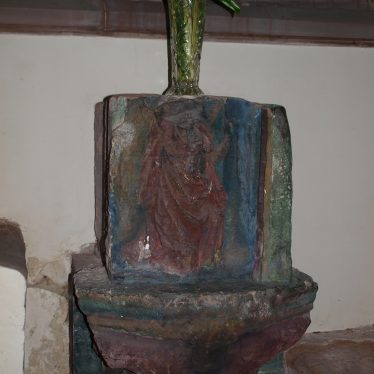 Part of the figure of an Angel, discovered at Water Orton.
Image courtesy of Caroline Irwin 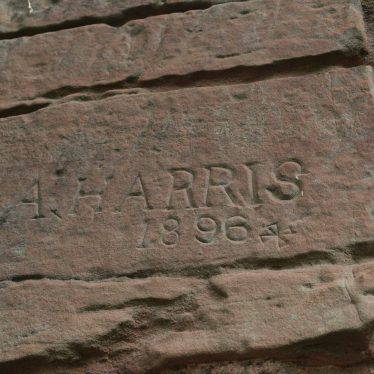 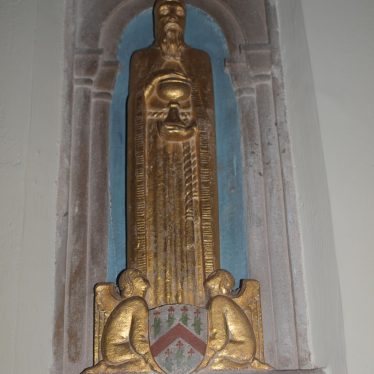 St Nicholas, Bishop of Myra, who lived in the 4th Century and to whom the church was dedicated when it was built in the 12th century.
Image courtesy of Caroline Irwin 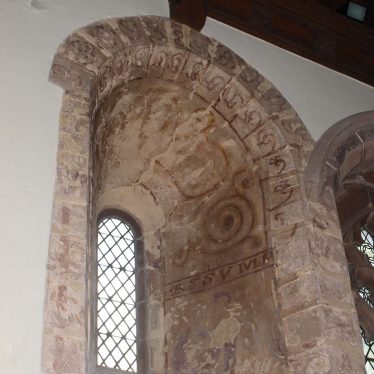 The wall paintings which surround the 12th century windows date from Medieval times and were restored in 1972.
Image courtesy of Caroline Irwin

Thanks to someone posting photos on a Social Media site recently I discovered a church fairly close to home with some very interesting features. I’d never thought of visiting this church before – another illustration that we often miss what is “on our doorstep”.

The village of Curdworth was the first recorded Anglo-Saxon settlement in the Midlands of the first King of the Mercians, Creoda, in 583 AD. Curdworth or Credeworde means “Creoda’s Clearing” and is believed to be the located at the centre of England. Although I think the village of Meriden not far away makes a similar claim!

A church has probably existed on this site since Saxon times but the present Norman Building dates back to 1165. In the 15th century the church was lengthened and a tower was added in 1460 by Richard Neville, Earl of Warwick. At the time it was intended to add a spire but this never happened.

The unusual square font with carvings dates back to Romanesque times and is one of the original features of the church. It was buried under the Nave floor, perhaps during the Reformation, and was re-discovered in 1895 when the church was refurbished. The top of the font has been cut down and some of the figures have heads missing.

The stone in one of my photos came to light when some repairs were carried out on an old bridge at Water Orton – it is apparently part of the figure of an Angel which had been badly damaged (the head is missing) and was brought back to the church by the Reverend Lancelot Mitchell who was Rector at Curdworth between 1905 -1937. The wall paintings which surround the 12th century windows date from Medieval times and were restored in 1972. There is also a stone that commemorates Sarah, daughter of Cornelius and Anne Ford who lived nearby at Dunton Hall in the 17th century. She was the mother of the famous Samuel Johnson.

I’m currently reading a fascinating book by Matthew Champion called “Medieval Graffiti – The Lost Voices of England’s Churches” which gives details of the many types of marks, graffiti and carvings (Mason’s and Merchant’s marks, compasses, ships, crosses, witch marks, knights and dragons etc) left in Medieval churches which tell a story of the many people who used the church at that time. So I couldn’t resist looking for some graffiti of my own!

There was plenty round this door with examples from the 19th century and the 20th. Sadly, I managed to miss the best of all – Mason’s marks of an arrowhead by two of the small round-headed windows in the chancel although I suspect I may have needed a torch and binoculars to spot them!

The playing fields next to the church were the scene of a skirmish of the English Civil War at the Battle of Curdworth Bridge. When I did some research into the church on the internet I discovered that there is allegedly royalist treasure buried in the churchyard which is protected by a headless ghost! – apparently there are also unmarked graves of Royalist and Parliamentarian soldiers buried here too.