You are here: Home>Locations>Warwick>The Hornet That Isn't, and a Sparse Warwickshire History

The Hornet That Isn't, and a Sparse Warwickshire History 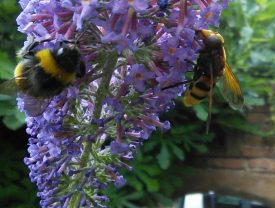 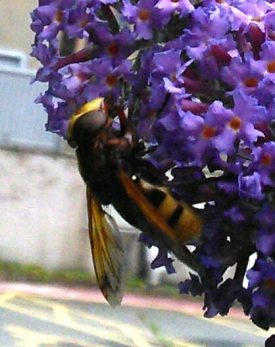 We at Warwickshire County Record Office are very fortunate to work in the middle of Priory Park, Warwick. We see quite a bit of wildlife. Generally it is of the more usual type, but sometimes we see some rather nice things. Even the commonplace, for example mewling buzzards circling overhead on a crisp sunny morning, or a shining Holly Blue skimming through the car park, can give one a lift. A few weeks ago there was a Green Woodpecker (or old name Yaffle) by the bench outside the office.

Occasionally, you can literally be stopped in your tracks. On leaving the office one evening, I passed the buddleia growing by the path, on it was a huge hoverfly I’d not seen before. I managed to get my phone out of my bag to grab some photographs, before the bee frightened it off.  It looks pretty intimidating, but is totally harmless. It mimics a hornet for protection.1

The larvae live in the nests of wasps including Vespula germanica and V. vulgaris. The larvae probably feed on debris accumulating in the cavity below the nest itself. The striking adults which resemble worker hornets Vespa crabro are recorded from June to October. They feed on a wide range of flowers including thistles Cirsium and Carduus, brambles… and in gardens, privet and buddleia.

This hoverfly, one of the largest UK species, is Volucella zonaria.  A species which  was first recorded in 1901, and up until 1940 was only known from two specimens in the whole country. Since then it has colonised parts of the south coast and London. It has been noted in Leicestershire.

There are only two other records of Volucella zonaria  in Warwickshire – one in Shirley, Solihull in 2016 and one in Leamington in 2014. Keep your eyes peeled if you are interested in such things. If not, keep ’em closed! Although by doing so you will also miss the delight of the Painted Lady and Red Admiral cavorting in the shrubbery.

Where else but the record office!

1 We do get hornets in the park.  Last year a pair of magpies were seen catching them in flight in the staff car park!  So much for looking like a hornet being protection