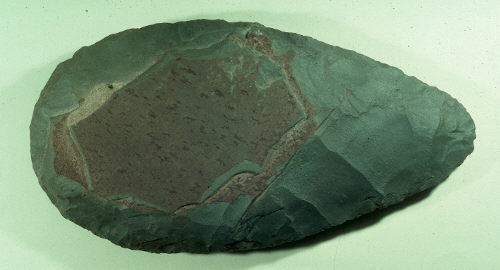 Findspot - four Palaeolithic handaxes, a pebble tool and a scraper were found in a river channel 1km south of Bubbenhall. The finds suggest that this was a pre-Anglian Lower Palaeolithic occupation site.

1 A palaeolithic site first recognised in 1984, revealed during the extraction of the overlying periglacial gravels. An ancient river course with four distinct channels. The most important information was recovered from the two earliest channels which contain large amounts of environmental data including mammal bones, plant fossils, insect remains and mollusc shells. Most significantly there are also stone tools: four handaxes, a cobble tool, a scraper and two flakes; only one of the flakes was found in situ (in the earliest channel – about 500 000 years old). Three of the handaxes are made from a non-local material, the nearest source for which is in Wales. It is suggested the tools were imported after they were made, and that two of them were possibly crafted by a single manufacturer at the same time and in one location. The stone tools are thought to represent a temporary hunting camp made by a small group of early humans. Waverley Farm Pit site is comparable with Boxgrove (W Sussex), High Lodge (Suffolk), and Kents Cavern (Devon).
2 Further information.
3 Analysis of the stone tool assemblage, comprising 3 andesitic tuff handaxes, 2 modified Bunter (quartzite) pebbles and a Bunter flake. Details of the discovery, local geology, petrology, artefact morphology and state of preservation. Andesitic tuff found in the Lake District and North Wales but most likely source local till glacial erratics. Finds mostly unweathered and from a secure context.
4 Detailed analysis of the site, its stratigraphy, its fauna (mammalian & molluscan) and flora, ecology and environmental implications. Also discussion of 3 hand axes and 2 quartzite pebble flakes and their relative context. The origin of the andesitic tuff is revised with external source deemed likely – Lake District on petrological grounds – probably with tools made there and brought in.
5 This report refers to further work at the gravel pit. This includes mention of the discovery, in 2004, of a further andesite handaxe on the pit floor, by the pit manager. The Baginton Gravels at this pit have recently been re-dated to Marine Isotope Stage 13, and together with the sandy organic channel deposits lying below them form part of the Bytham River, which flowed from the Midlands eastwards to East Anglia prior to the Anglian glaciation. This early date makes the artefacts of even greater significance, as it shows unequivocally that handaxe technology in Britain had reached a high point in an occupation period that preceded the Anglian (c.478-423 kyr BP). It also corroborates the observation that quality in Acheulian biface technology is no indication of age; much cruder handaxes may be seen from sites within the range MIS 11 to 6. Subsequently a closer look at the gravels recorded 100 more artefacts. One more andesite handaxe was recorded. The rest of the assemblage was manly comprised of exhausted cores. These finds are from the part of the pit that does not expose the Bytham channel gravels, thus indicating that the scatter of artefacts is not confined to the channel itself, but spreads laterally away from it. The in situ nature of the deposits is hard to judge; so it is is difficult to ascertain whether this relates to a relatively narrow chronological band, or a palimpsest of activity over hundreds of years.