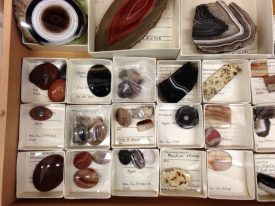 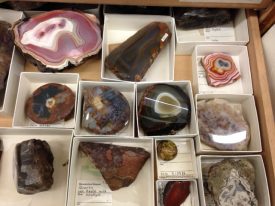 Amongst the museum’s mineral collections there are many polished semi-precious stones of the variety known as agate. This is a finely crystalline variety of the common mineral quartz, well known for its colourful banding (due to mineral impurities) and its ability to take a high polish. Agate, like all varieties of quartz is very hard (it will scratch steel), and many of the museum’s specimens appear to have been collected as pebbles that have withstood erosion for thousands or even millions of years.

Traced back to the 19th century

Some of our agates can be traced back to the 19th century collecting activities of the Warwickshire Natural History and Archaeological Society. Some are unprovenanced – meaning that we don’t know where, and in some cases when, they were collected. However, this does not detract from their natural beauty and popularity as fascinating objects from the natural world.

Agates are typically but not necessarily banded, presenting diverse rainbow-like hues of white, green, yellow, orange, red and other colours, due to mineral impurities. The banding is caused by deposition of successive phases of silica, within what were originally rounded cavities within rock types such as cooled, solidified lava and chert.