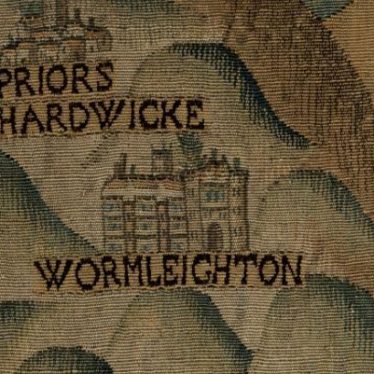 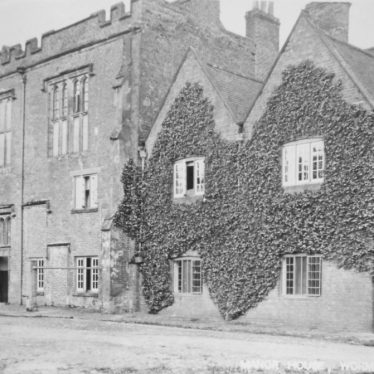 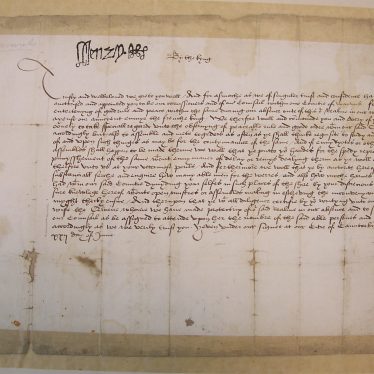 The 1513 document stamped with the signature of Henry VIII at the top.
Warwickshire County Record Office reference CR2981/7/1/5/1

In 1506, William Cope sold the manor of Wormleighton to his wife’s cousin, John Spencer of Snitterfield beginning a long association between the Spencer family and Wormleighton.

John Spencer built a manor house made of brick with battlements at Wormleighton around 1512 to replace a ‘sory thatched hows’ previously there. A representation of the house that John built can be seen on the Sheldon Tapestry map of Warwickshire. According to Pevsner, the manor house was once a ‘grand affair’, almost as grand as Compton Wynyates.

Along with his complete overhaul of the manor house, Spencer is assumed to have completed the depopulation of the village at this time, for he was cited by Cardinal Wolsey in a commission of enquiry investigating the destruction of villages in 1517. This could have been for aesthetic reasons – not wanting the tenants to spoil the view of his house (or perhaps the view from his house.

Commissioner of the Peace

John Spencer was appointed a Commissioner of the Peace for Henry VIII between 1509 and 1515, along with other notable men such as Edward Duke of Buckingham, Edward Sutton Lord Dudley, Sir John Fisher, Sir Edward Greville, Sir Robert Throckmorton and Simon Digby.

A signet warrant addressed to select commissioners in Warwickshire from Henry VIII survives  for this period. It is endorsed in a later hand as letters to Sir John Spencer of Wormleighton ‘commonly called old Sir John’. In the signet warrant, which dates to 1513, Henry VIII orders his commissioners to retain the peace whilst he is away fighting ‘ayenst our anncycent enimye the frenche king’ and notifies them that he has made ‘our derest wife the Qwene…  protectrix of o[u]r said Realme in our absence’.

Most of the manor house at Wormleighton was destroyed during the civil wars of the 17th century. Only the brick north wing from the original house remains standing along with a gatehouse which was built in 1613 slightly apart from the house. The east wing of Virginia House in America – the house partly created from The Priory which once stood on the site now occupied by Warwickshire County Record Office – is modelled on this gatehouse.

The panelling from the first floor of the house, however, still survives at Althorp in Northamptonshire, Sir John Spencer’s other home, which was constructed around the same time as the manor house at Wormleighton. After the civil wars, Althorp became the main seat of the Spencer family and home to some of Sir John’s famous descendants including Lady Georgiana Spencer (later Duchess of Devonshire) and Lady Diana Spencer, who became Princess of Wales in 1981.

This article is based on part of a Show and Tell talk given at Warwickshire County Record Office on the Signet Warrant of Henry VIII.