You are here: Home>Locations>Warwickshire unspecified or out of county>Nystagmus in Warwickshire Mining Compensation Records 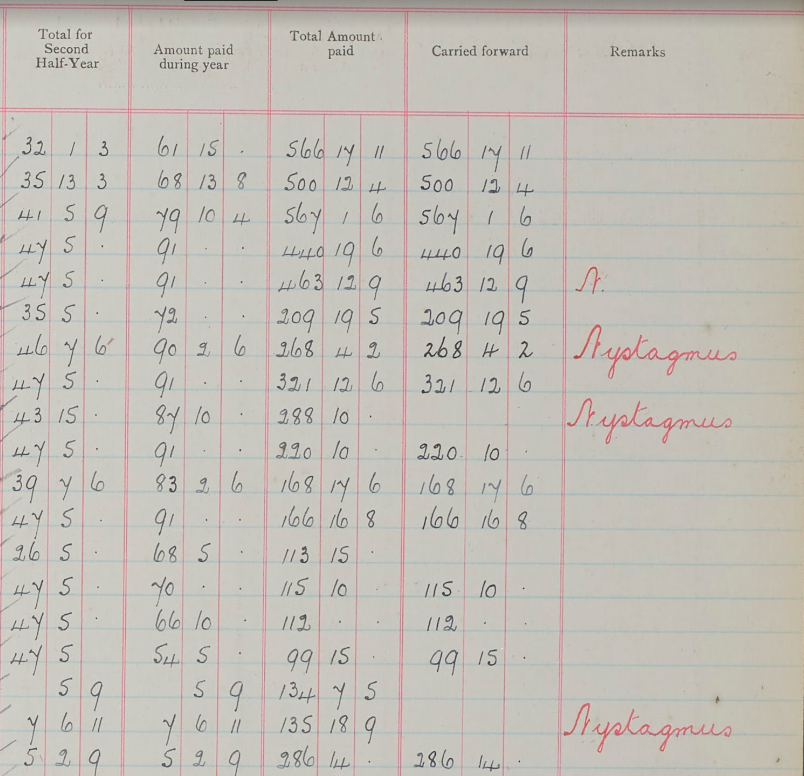 Entries in the MCOMIC Compensation Registers showing payments for Nystagmus

While cleaning and digitising the volumes for our Mining the Seams project, we couldn’t help but notice how many of the entries contained the letter ‘N’ in the remarks column. We noted it down to investigate, and the answer presented itself to us soon afterwards, when an entry wrote the word out in full: ‘Nystagmus’.

The Royal National Institute of Blind People (RNIB) describes nystagmus as ‘a condition which causes constant movement of the eyes which you can’t control’.  This ‘dancing’ motion is also something that some people can do on command (so-called ‘voluntary nystagmus’). We discovered that I have the ability, so you can see an example in the attached video!

In the early 20th century, a specific version of the condition called ‘miners’ nystagmus’ was identified as ‘an occupational neurosis which is confined to workers in coal mines’. It has generally been thought to relate to the poor lighting conditions of the workplace. An article by T. Lister Llewellyn in 1912 described how miners experienced the condition:

“The man first notices that he is unable to perform the more skilled part of his work; he cannot notch timber well, and fails to drive his wedge, or strike with his pick the exact piece of coal aimed at. He next complains that the lamps dazzle his eyes, that he is unable to see anything at night time, and, finally, that the lamps and all surrounding objects are going round and round. Headache, varying from slight pain between the temples to attacks of extreme severity, giddiness on exertion and stooping, night-blindness, dread of light, and in severe cases marked nervous depression (two of my cases have expressed suicidal intentions), are all found in a marked case of nystagmus.”

A fascinating article by Ronald S. Fishman describes miners’ nystagmus as ‘one of the first occupational illnesses ever recognized as being due to a hazardous working environment.’ The article is well worth a read; it explores the impact of nystagmus on the British compensation system, as well as considering why occurrences of the the condition significantly declined in the mid-twentieth century onwards.

The extent of the illness

It was startling to see how many of the miners who are listed in the Warwickshire accounts ledgers were receiving compensation for nystagmus. It would be interesting to learn whether it co-incides with Fishman’s claims that ‘new cases of miners’ nystagmus were rare after World War II’. However, we still only have a subjective indication of the numbers of entries which refer to the illness. When the Mining the Seams project is completed and these registers have been transcribed into a database, we hope that academics and researchers can conduct statistical analysis to fully understand the extent of nystagmus among Warwickshire miners.

Map marker in the right place? If not, please correct the map.
Locations
Warwickshire unspecified or out of county (182)
Subjects
Mining and Quarrying (548)
Author
Beck Hemsley