You are here: Home>Locations>Wroxall>More Memories From Manor Farm, Wroxall 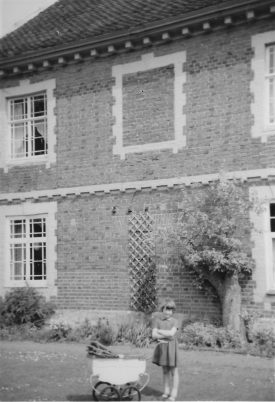 The Farmhouse: Garden side with my daughter (c.1962.)
Image courtesy of ED Graham 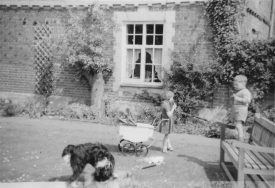 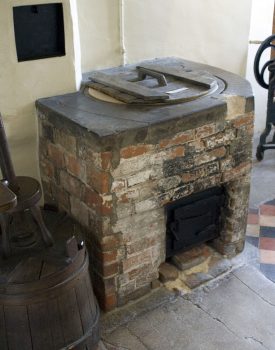 A laundry copper, like that used at Manor Farm, 2012
Image originally uploaded by Prioryman to WIkimedia

Riding tricycles and looking up at the sky

Opposite the side door on the left was a long blue tiled/slabbed passageway that was great for riding tricycles up and down! The back kitchen had a very large sink with a hand pump, which often had to be primed with water before it could be persuaded to produce. Apparently the water tank was under the stone floor. Round two sides of the wall were sconces, with shelves and a small food safe and underneath my mother had a very large stone crock in which during World War Two she preserved eggs in isinglass.

At the end of the kitchen were two coppers. Between the coppers was a very large fireplace with side ovens and a spit contraption. The chimney was so wide that it was very easy to look up and see the sky. Opposite the copper at the far end was the woodshed where there was a large block (probably a chunk of a tree trunk originally) on which we (not just the grown-ups) used to split wood for fire kindling. There was a door leading out from the wood store to the coal house.

Memories from the dairy

Returning to the back hall there were steep steps down to the cellar.  The cellar was intended to be used in an emergency during World War Two, but was never needed.  On the far right-hand side of this back hall was the china pantry with many shelves while the doorway ahead led into the double roomed dairy. The first part of which had a big free standing larder cupboard, which stood on a brick built wall. This wall continued along the adjacent wall and on it was a large old white ceramic sink in which the pork from the slaughtered pig was put to be preserved with salt and saltpetre. The second part of the dairy had granite sconces (known as ‘trams’) along three sides. It was great fun to jump off these. There was a high window overlooking the farm yard and the dairy door led into the back yard.

The walls of the dairy, china pantry, back hall, entry and back kitchen were all whitewashed each year. Of course, there was no such thing as gas or electric light, so we used paraffin oil, Aladdin lamps or Tilly lamps and had to take little oil lamps or candles to light us to bed. The one and only wireless in the kitchen was powered by dry batteries and accumulators, which had to go to the local garage (Mr Bolton’s) every so often to be recharged.