You are here: Home>Locations>Southam>‘The Abbey’, Southam 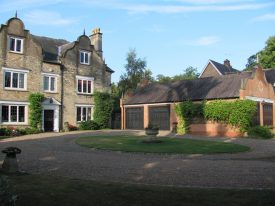 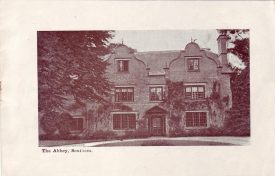 The Abbey is a detached Grade II Listed house set within the Southam Conservation Area. The three storey property is approached from Warwick Road through a pair of early 19th century pillars, from which are hung heavy wrought iron gates, to a circular gravelled drive. The house is constructed of a mixture of stone and brick under a slated roof with two large chimney stacks of 17th/18th century brick in English bond with stone coping offsets. The front gables are mentioned in Pevsner’s ‘The Buildings of England: Warwickshire’, in which Pevsner refers to its stone ‘Jacobean shaped gables’. The oak window frames have leaded light iron casements and internal wooden security shutters. The main house, originally had an ‘L’ shaped footprint and dates from the very early 17th century, but was altered to form a rectangular shaped building in the 18th and early 19th century.

The interior has large spine beams with stepped stops, 17th century queen-post roof with joiners’ numerals and some 17th century plank doors and 18th century cupboards to all floors. Other features include original flagstone floors, an inglenook fireplace with massive timber beam above, four hand-carved blue Horton stone fireplaces, ceilings with exposed beams and timbered or plastered cornices. Of particular interest is the 17th century baluster staircase with galleried landing; a priest hole and a stone staircase leading to a flagstone floored cellar with slate wine bins.

The grounds to the front of the house have a Cedar of Lebanon tree, which was planted in 1771 by a Miss Chambers, then aged seven, and garaging for four cars. The rear grounds have a ha-ha, a small orchard, a number of ancient yew trees and extensive lawns.

During a visit to ‘The Abbey’ in March 2000 by representatives of the Southam and District Local History Society, they described the property as ‘the most significant house, both architecturally and historically, in the Southam area’. The current owners bought the house in 1998 and, during their custodianship, have worked continuously in an endeavour to restore the property to its original condition.