You are here: Home>Locations>Wroxall>The Farm Buildings of Manor Farm, Wroxall 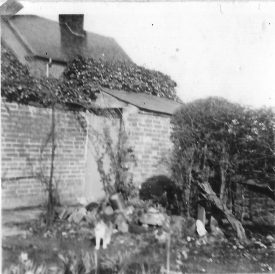 Side view at Manor Farm, Wroxall. Garden wall at end of house, with door leading into kitchen yard which contained the well and engine for pumping the water. The small building at the end of the wall by the door was a toilet which was used as a tool shed! The tall house at the back was the farm cottage and the ivy (?)slope on the extreme left was the back part of the farmhouse which contained the back kitchen and upstairs apple store.
Image courtesy of ED Graham 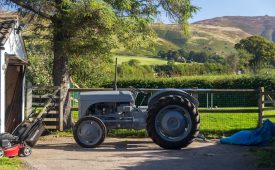 The farm buildings at Manor Farm consisted of a stable, an engine house and dairy, four bays, known as standings, for milking cows, two loose sheds, one known as the calf pen and a set of pig sties with a boiler house for cooking the pig swill. Each pig sty had a sliding hatch in the far wall so that the pigs could be let out into the open area which also contained a, usually very muddy, pond.

The stable was divided into stalls with mangers for hay and horse feed. Only two were used for the horses and at lambing time one or two of the others served at maternity ‘rooms’ for any sheep and lambs which needed special attention. The engine house had the necessary equipment to provide power for the dairy and the milking system. The dairy initially had a steriliser and cooler from which the milk was poured into ten gallon churns. These churns were then put by the big door nearest to the road for collection by the milk lorry. Later the dairy had a large tank, instead of the churns, with an outside access point to which the milk tanker driver connected a pipe to drain the milk into his tanker.

In front of the cowshed was a large open area where the cows were gathered before being let into the bays. On the side (right looking from the house) was a loose yard with an enclosed building on one side and a covered open area on another. It was used at various times for cows which were calving, pigs farrowing or as a deep litter house for hens. Next to that was an open yard with a gate leading into the prison field. At the other end of the cowshed area was a pit from which the animals drank – this was lined with blue bricks. Opposite the pit was the cart shed and at right angles to this going back towards the house there were two more ‘rooms’ (one for the ducks) before one reached the garage and the house

Varied uses for the garage!

The garage was also a workshop, with a fireplace (never used) where various items were made or repaired and where the carcass of the killed pig, was hung before the local butcher came to cut it into joints. There was a grassed area in front of the house between this range of buildings and the house dairy. I think there was a water pump in its centre. Then there was another range on the far side, which again would be used for animals needing special attention.

To return to the inside of the cowshed complex at the top was a space which could take wagons to bring in the hay and straw for the animals. There were full height double doors at both ends. The first thing to note was the well, fenced off with iron railings. I do not know how deep it was. Then there was the full height hay shed and beyond that a grain store with the hay loft over it and we spent many happy hours climbing the fixed vertical wall ladder to reach it and then jumping down into the hay below The cowshed itself had opening flaps onto the roof and by climbing up the metal cow standings we could reach them and out on the blue slate roofs we went.

There was a passageway between the grain store and the tractor house, which also contained rather lethal machines for chopping up the mangolds and chaff for cattle food as well as weighing machines complete with heavy weights. The tractor house was Bill’s domain and woe betide anyone who touched his beloved tractors.

Over the years we had several Fordson tractors, a Fordson Major, a Massey Ferguson and little grey Ferguson. I did drive a Fordson and the grey Ferguson. At the end of the passage was the meal house where the food was mixed in a large heap before being put into buckets to be fed to the animals. Sometimes molasses were added to the mix – I can still smell the treacly aroma.