You are here: Home>Locations>Dorridge>Midland Counties Asylum 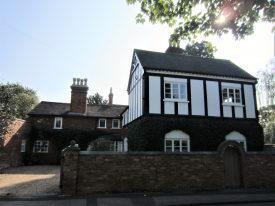 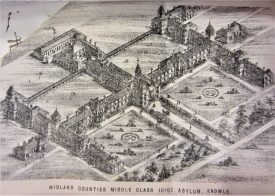 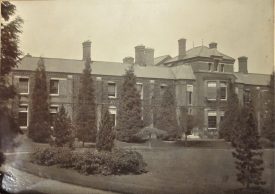 A small private lunatic asylum was founded in Knowle in 1866 by Miss Ann Darke; in 1867 it was licensed for 20 female private patients.1 The asylum was located in a building called Dorridge Grove, that had previously been the Railway Tavern, which still survives today as residential accommodation in Knowle Wood Road.2

The asylum was converted into the Midlands Counties Idiot Asylum in 1868. ‘Idiot’ was the term used at that time for those who had learning difficulties from birth, as opposed to ‘Lunatics’ who developed mental problems later on in life that might fluctuate, and of course we recognise that this terminology is insulting and unacceptable today. In 1868 the asylum was licensed for 12 females and eight males up to the age of 12.3 It moved to a larger, purpose-built building nearby in 1874, and was intended, as you can see from the title on the headed notepaper, for the middle classes who could not afford an expensive private asylum, but did not want their relatives to enter the pauper asylum at Hatton.4 The plan for the new buildings shown here was a grand design, around open courtyards, though most of this was not actually carried out. A substantial building was constructed of red brick with a slate roof and it housed 50 patients in the 1880s. Early superintendents included Miss Ann Darke, Mr J.H. Kimbell, Miss E.S. Stock and Dr T.B.E. Fletcher. The asylum changed its name in 1801 to the rather more acceptable ‘Midland Counties Asylum’ and again in 1911 to the ‘Midland Counties Institution’.

The NHS and Middlefield Hospital

The Midland Counties Institution joined the NHS in 1948 and contained nearly 300 patients at its peak in 1951; it was renamed Middlefield Hospital in 1959. Patients were offered activities including dances, films, sport and outings. In the 1970s, some of the residents moved to group homes – as it was increasingly recognised that this was more desirable for those who could cope – and by 1990 the number of patients had fallen to around 60. The hospital closed in 1992 and the buildings have since been demolished, though a foundation stone is said to survive. ‘Middlefield Avenue’ now stands on part of the site.

The residents carried out a range of activities within the hospital and the surrounding community. They helped with care for other residents, cooking, cleaning and maintenance of the premises. The boys could learn tailoring, carpentry, making and repairing shoes. The girls could learn sewing and knitting. Some residents made baskets and others worked for local businesses or helped local people with housework and gardening.

Records of the asylum

A fascinating record of the hospital has been created by former residents, relatives and staff: this includes photos, videos and memories that can be accessed online. Warwickshire County Record Office holds a number of records including interesting photographs relating to this asylum.5

Linkedin
More from Dorridge
More from Asylums
More from Hospitals and Health, Buildings