You are here: Home>Locations>Coventry>Ford's Hospital Coventry 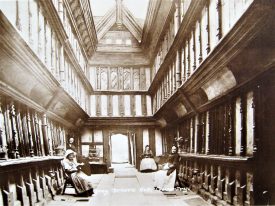 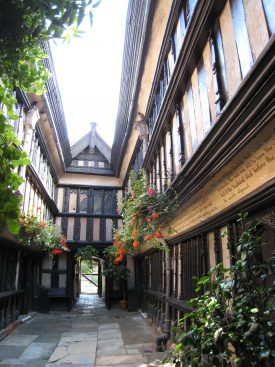 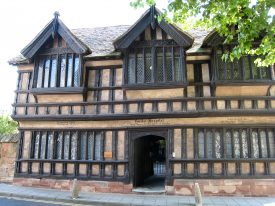 This almshouse was founded in 1529 by William Ford, a wool merchant, for five men and their wives. The Hospital came under threat after the Reformation, with the crown claiming the lands in the early 17th century. Coventry corporation, however, recognised the value of this home for the elderly; they repurchased most of the land and took over responsibility for the almshouses.

By the middle of the 19th century the 1851 census shows the 15 residents were all women, most of them native to Coventry. Many had been silk workers and there were some feminine occupations typical of the time: charwoman, nurse, housekeeper and servant as well as a shopkeeper, a schoolmistress and a broker. The charity also supported pensioners living elsewhere in Coventry.

The hospital is sometimes called Grey Friars because it stands in Greyfriars Lane, named after an ancient monastic foundation, but it was never in fact part of it.

We are fortunate to have the old postcard to show us the building in the early 20th century, because it received a direct hit during World War Two. The Matron and several of the residents died, and some almshouse records were destroyed. However, the site has been carefully restored and offers a very attractive sight today. There’s a small garden at the back of the building.

Residents of Ford’s hospital would be ejected for: ‘haunting alehouses, making strife or other notable misdemeanors’. Originally widows of Hospital residents received a smaller pension than widowers, and had to share a room. Residents were not allowed to leave belongings to their relatives and their possessions had to be sold to defray expenses after their death.

The original residents were paid 5d a week, shortly raised to 7½ d a week; later in 1621 this was raised to 2s a week to married couples and 1s a week for the nurse plus 10s worth of coals a year per house. Each resident also received a blue gown every other year but these gowns were not given after 1829.

By 1874 residents received 4s a week, and 1½ tons of coal a year. A bonus of 10s was given to each inmate on the day the trustees visited each year. If you would like to know more there’s an interesting book about the two Hospitals in Coventry.1