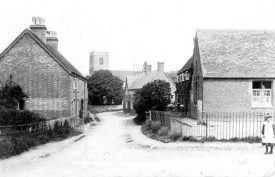 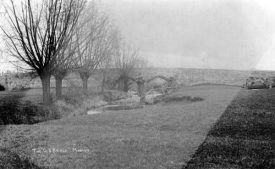 A Mr. Cole wrote down his reminiscences of his childhood life in Marton, and they paint a picture of village life 100 years ago.

We went to Marton in a horse drawn van. Mother, brother and myself riding on the tail board. There were very few cars in 1910. We crossed the bridge, over the river Sowe into Marton. Dad was waiting outside a cottage which was just covered with scarlet nasturtiums.

He literally cut his way in. The cottage had a room on the ground floor, a kitchen or pantry adjoining down two steps, and a bedroom above.

Outside, a closet above a midden. In here was a double seat. There was a large or small hole to be used according to the size of the user. Water had to be drawn from a pump; sometimes the odd worm or frog came up with the water. Well, that’s how villages were for a long time after 1910.

It was during this year, 1910, that the flood came. We were warned by one of the very few villagers who spoke to Mother that the river was rising and we must get all we had upstairs. They were right. Muddy water halfway up the stairs.

Now, on the opposite side of the road was a blacksmith’s shop. There were advertising plates on the walls and Mother began to teach me my letters. I could very soon read “Lipton Tea”, and the same letters occurred in books. I could read!

I started school in Marton. Mr. and Mrs. Elliot were the staff. It was, of course, a “church” school. State schools were not to be found outside the larger towns, certainly not in villages. The only lesson I remember learning there was how to lace up a pair of boots. This did not assist me much as I wore button-boots.